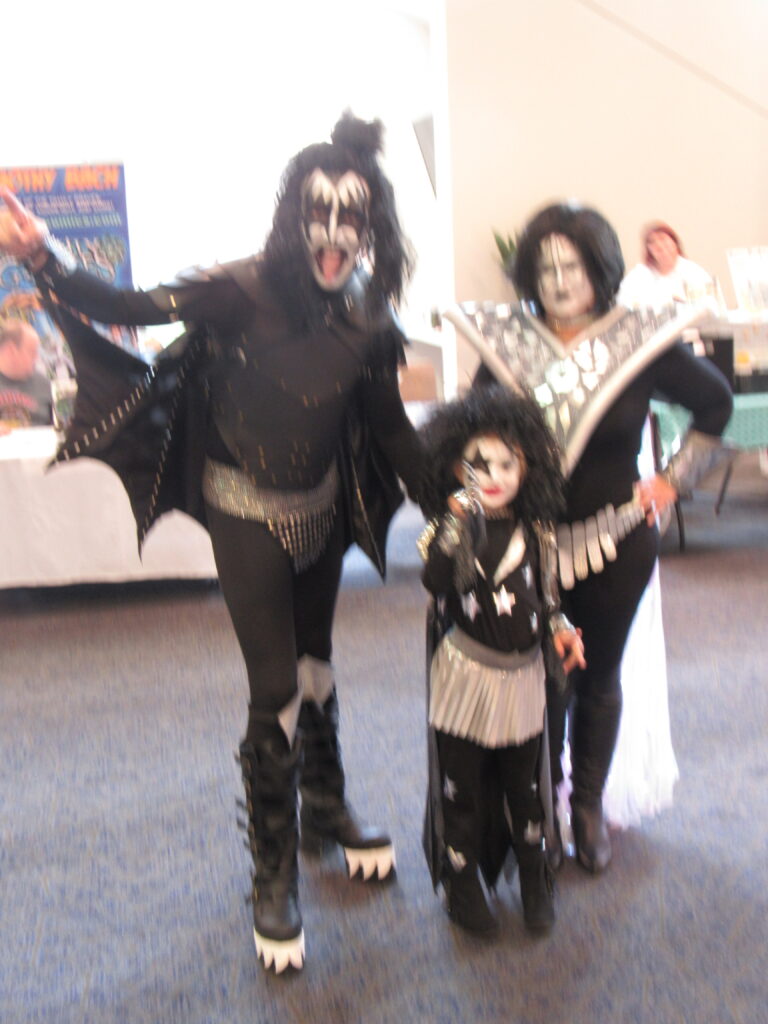 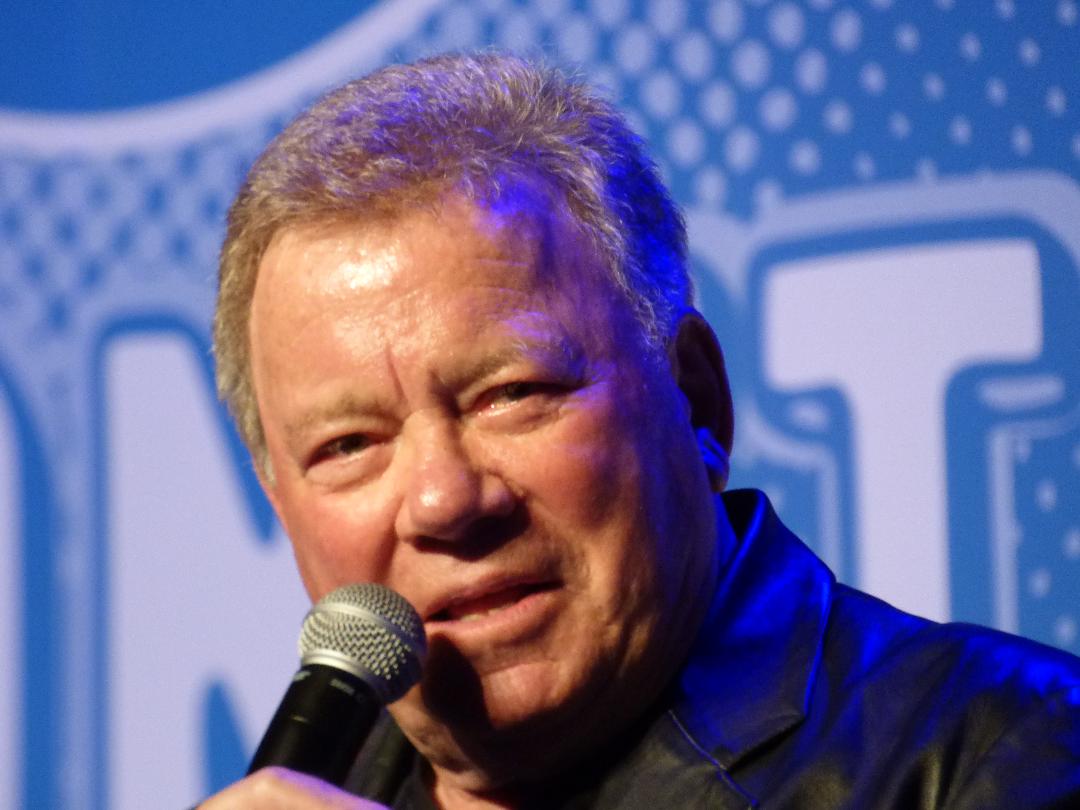 Planet Comicon, one of the best and biggest fan-driven conventions in the country, ended another great session this past weekend in Kansas City.

With such celebrity guests as Cary Elwes, Michael Rooker and Scott Wilson, the lines for autographs were long (but moved quickly) and there were plenty of vendors ready to work a deal or two. Whether your love was movies, television, comics or toys, there was plenty to see and plenty to do. As in other years, many guests came in the guise of their favorite pop culture characters.

The “Behind the Mikes” podcast team of Moviemike, Loaf and Brett “Movie Quote” Coker, along with photographer Dan Lybarger, worked the vast expanse of Kansas City’s Bartle Hall, speaking with fans and capturing the sights of the event. Fans of every genre’ were encouraged to get on stage for trivia, hosted by a gentleman in an amazing looking suit!

A huge THANK YOU to Chris Jackson and his Planet Comicon staff for making this annual event one of the most anticipated each year!

Moviemike, Loaf and Brett (l-r) bright and early in the morning.

The artist with her signed painting

The trivia quiz master and his assistant.

Three of a kind

Despite downtown Kansas City being overrun by Big 12 College Basketball fans, more than 40,000 people, many in costume, filled Bartle Hall to participate in this year’s best in the Midwest gathering, Planet Comicon.

Lured by an unprecedented reunion of cast members from “Star Trek: The Next Generation” and first time Planet Comicon appearances by genre’ royalty William Shatner and Lee Majors, fans were treated to an event unrivaled in the Midwest.

Every genre’ of fandom was represented, from celebrity guests to well-known comic artists Film and television fans had the opportunity to meet and greet many of their favorite stars. Besides the incredibly popular Shatner and Majors, such stars as Margot Kidder and John Ratzenberger were on hand. “ST:TNG” fans were in heaven as they had the opportunity to chat with many of the original cast members, including Brent Spiner, Jonathan Frakes, Marina Sirtis, Michael Dorn, Levar Burton and Wil Wheaton. Even more of a treat – an unannounced John DeLancy was also in attendance.

Comic fans had the opportunity to meet legendary artist Neal Adams as well as new-to-the-game Darryl McDaniel, best known for his time with the musical group Run DMC.
With nice weather for the weekend (a sincere rarity this year) many fans were encouraged to attend in costume. Characters from “Star Wars” and comic-book heroes seemed to be the most popular costumed characters, though pretty much every genre’ was well represented.

After two days of packed panels and costumed fans, Kansas City’s Planet Comicon 2012 came to a close this past Sunday.

Not even unseasonably warm weather or the fact that the University of Kansas’ basketball team was playing for a spot in the Final Four (they made it) could keep fans away from the Overland Park Trade Center in Overland Park, Kansas, just outside of Kansas City.

Drawn to the show by such celebrity guests as Edward James Olmos, Billy Dee Williams and a trio of stars from “Buck Rogers in the 25th Century,” Planet Comicon 2012 may have been the best attended show in the history of the convention.

Buck Rogers himself, Gil Gerard, remarked to me, “this is the busiest Sunday I’ve ever seen at one of these events.” Gerard and fellow “Buck Rogers” actors Erin Gray and Felix Silla spent the weekend meeting and greeting their fans. Other guests included Robin Thorsen and Amy Okuda from “The Guild,” graphic artists like Bernie Wrightson and Blair Butler, star of G4’s “Attack of the Show.”

September 1, 2011- LIONSGATE® (NYSE: LGF), a leading global entertainment company, and AMC Theatres (AMC), a leading theatrical exhibition and entertainment company, are thrilled to jointly announce the unprecedented success of the AMC Stubs rewards program screenings of the inspirational sports drama WARRIOR. The screenings, which took place at 90 AMC theatres in 47 markets nationwide Wednesday, Aug. 31, marked the first time AMC has offered a free advance screening to members of its AMC Stubs rewards program. Tickets were claimed quickly after they became available to AMC Stubs members on Aug. 12, and over 17,000 people attended the screenings, which were filled to capacity in the majority of their locations.

AMC’s Facebook page has exploded with positive feedback from fans about their experience.  Comments offered raves for the film, with one attendee describing WARRIOR as a “Great flick! Crowd was cheering, laughing and crying; often all at the same time” and another adding, “Intense moments!  Everyone in their seats cheering!  Made me feel like I was there ring side and not at the movies!  GREAT film!”  The film also surprised many attendees with its broader than expected appeal.  One AMC Stubs member explained “I usually don’t like sports films but this one truly was special.  A must see.  Thank you,” while another emphasized how much his girlfriend loved the film.  Along with their gratitude to AMC for offering the free members screenings, many fans underscored that they wouldn’t have otherwise seen the film, and that they plan to attend again on opening weekend and will recommend the film enthusiastically.

Said Lionsgate’s EVP of Exhibitor Relations and Operations, Mike Polydoros of the partnership, “We’ve known for some time that the best tool we have to sell the movie Warrior is the movie Warrior, but these particular sneak preview screenings have so many added benefits for all involved beyond the positive word of mouth that we know the film will generate: we love working with our partners in exhibition to add value for their customers in creative ways and drive people to their theaters, and this was a great example of that.  And we got a great marketing boost from this collaboration as well; the invitation was extended to more than 1.5 million AMC Stubs members, which helps raise additional awareness for the film.”

“Lionsgate shared this special film with us a while ago, and we agreed the story was one worthy of providing to our AMC Stubs members as an incremental benefit,” said Sun Dee Larson, Vice President, Film Marketing and Communications at AMC. “Our members were overwhelmingly receptive to the offer and thanked us personally at the screenings for adding this benefit to the already rich rewards we offer. We also received positive feedback on our Facebook page and Twitter feeds.”

AMC Entertainment Inc. delivers distinctive and affordable movie-going experiences in 360 theatres with 5,128 screens across the United States and Canada. The company operates 24 of the 50 highest grossing theatres in the country, including the top three. AMC has propelled industry innovation and continues today by delivering premium sight and sound, enhanced food and beverage and diverse content.

Haunted by a tragic past, Marine Tommy Conlon (Hardy) returns home for the first time in fourteen years to enlist the help of his father (Nick Nolte) to train for Sparta, the biggest winner-takes-all event in mixed martial arts history. A former wrestling prodigy, Tommy blazes a path toward the championship while his brother, Brendan (Edgerton), an ex-fighter-turned teacher, returns to the ring in a desperate bid to save his family from financial ruin.  But when Brendan’s unlikely, underdog rise sets him on a collision course with the unstoppable Tommy, the two brothers must finally confront each other and the forces that pulled them apart, facing off in the most soaring, soul stirring, and unforgettable climax that must be seen to be believed.

Lionsgate is a leading global entertainment company with a strong and diversified presence in motion picture production and distribution, television programming and syndication, home entertainment, family entertainment, digital distribution and new channel platforms.  The Company has built a strong television presence in production of prime time cable and broadcast network series, distribution and syndication of programming through Debmar-Mercury and an array of channel assets. Lionsgate currently has 15 shows on more than 10 networks spanning its prime time production, distribution and syndication businesses, including such critically-acclaimed hits as “Mad Men”, “Weeds” and “Nurse Jackie” along with  the comedy “Blue Mountain State, ” the upcoming drama “Boss” and the syndication successes “Tyler Perry’s House Of Payne”, its spinoff “Meet The Browns”,  the upcoming “For Better or Worse,” “The Wendy Williams Show” and “Are We There Yet?”.

Its feature film business has generated more than half a billion dollars at the North American box office in the past year, fueled by such successes as THE LINCOLN LAWYER, TYLER PERRY’S MADEA’S BIG HAPPY FAMILY, THE EXPENDABLES, which was #1 at the North American box office for two weeks, THE LAST EXORCISM, TYLER PERRY’S WHY DID I GET MARRIED TOO?, KICK ASS and the critically-acclaimed PRECIOUS, which won two Academy Awards®. The Company’s home entertainment business has grown to more than 8% market share and is an industry leader in box office-to-DVD and box office-to-VOD revenue conversion rate. Lionsgate handles a prestigious and prolific library of approximately 13,000 motion picture and television titles that is an important source of recurring revenue and serves as the foundation for the growth of the Company’s core businesses. The Lionsgate brand remains synonymous with original, daring, quality entertainment in markets around the world.