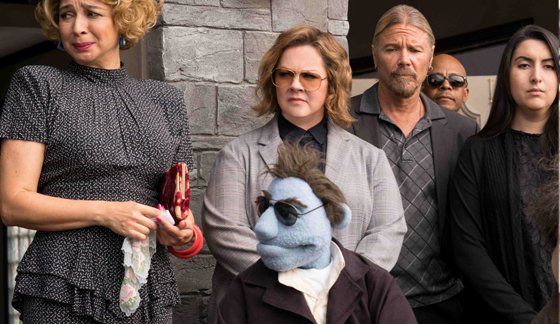 It’s been almost exactly 35 years since I met Jim Henson.

In September 1983 I was at the World Science Fiction Convention in Baltimore, where one of the films being promoted that year was “The Muppets Take Manhattan.”  Knowing Mr. Henson was going to be in attendance I took a couple photos with me.  One of him and Kermit the Frog taken behind the scenes of “The Muppet Movie” and one from “The Dark Crystal.”  I tracked him down and he very graciously signed both.  I got lucky because he happened to be walking around with Gary Kurtz, who produced “The Dark Crystal,” so I got his autograph also.  He was very friendly and, in speaking with him, I could tell he had a great sense of humor.  Which tells me he would love his son’s latest film, “The Happytime Murders.”

(Ominous voice) “In a world where humans and puppets live together….”

Meet Phil Phillips (voiced by Bill Barretta).  He’s a former puppets cop turned private detective.  Actually, he’s been the ONLY puppet cop.  Due to a mishap that led to the killing of an innocent bystander, Phil was fired and a law was put into place forbidding puppets to be police officers.  One day Phil is hired by a mysterious lady-puppet.  His leads take him to an adult bookstore, where he runs into Bumblypants, one of the puppet characters of the popular 80’s kids show “The Happytime Gang.”  As Phil investigates another part of the shop, Bumblypants is murdered.  Soon, other members of the cast are also brutally murdered and the finger points at Phil.  Can he clear his name?  Maybe.

A fun combination of live-action and puppets, “The Happytime Murders” is an outrageously raunchy look at what life may have been like on a certain “Street” if that show had taken place in the worse part of the worse town ever.  In the world of “Happytime” humans and puppets co-exist, though the puppets are often horribly treated.  Call it “Apuppethied.”  Phil’s former police partner, Detective Connie Edwards (McCarthy) is called in to investigate the case and must reluctantly team up with Phil before the entire cast of the show is murdered.  Along the way they must deal with a world full of sex, drugs and violence.  This isn’t your parent’s “Street.”

Let me say this up front (or in the middle):  THIS IS NOT A KIDS MOVIE.  Don’t be fooled by the puppets and the bright lights.  Taking a child to this film will traumatize them for life.  So, again, unless you want to see a puppet re-enactment of Sharon Stone’s famous reveal from “Basic Instinct,” or want to explain to your little one what an eight-armed reach-around is, leave them home.  That being sad, THIS IS AN ADULTS MOVIE.  The jokes are funny, the visuals outrageous and the overall mood of the film will put a smile on your face.  The combination of human and puppet characters is well portrayed, and as the film goes on, you forget your watching puppets.  They become believable characters, which is what you need to make a film work, especially a comedy.  Like “Who Framed Roger Rabbit?,” the melding of human and non-human characters is seamless.  Well, except for the seams on the puppets.  J

Media Mikes has teamed up with the friends at STX Entertainment to give (50) readers and a guest the chance to be the first to see the new outrageous comedy “The Happytime Murders.”

The film will be screened on Wednesday, August 22nd at the B&B Overland Park Theatre and will start at 7:00 pm

All you have to do is click HERE.  The first (50) to do so will receive a pass for (2) to attend the screening.   This is a first come/first serve giveaway.  Once the (50) passes have been claimed the giveaway has ended.  Good Luck!!

When first time author Crispin Nathaniel Haskins took pen to paper he combined two of his greatest passions: mysteries and the film “Jaws.” The finished product is the recently released “The JAWSFest Murders.” Haskins took time out while promoting his novel to sit down with Media Mikes.

Mike Smith: When did you come up with the idea for the book?
Crispin Haskins: I have always wanted to be a writer. As far back as I can remember I thought it would be cool. Last August, just before I went to Martha’s Vineyard for JAWSfest, I had a job interview for a sales position at work. I didn’t really want the job but I thought that I needed a change. I decided that if I didn’t get the job, I would use the time that I would have spent in the sales job finally writing my book. I thought of Paul McPhee (Artist), Jim Beller (Author) and Erik Hollander (Filmmaker), friends of mine using “Jaws” as a vehicle for their creative output. It’s the best thing to do. When people are frustrated about their life I have always said, “Follow your heart and the money will follow.” So, I did. Two of my favorite things are “Jaws” and mysteries. That’s how “The JAWSfest Murders” came to be.

MS: The book is very in-depth as to where things are on the Vineyard. Did you have to appeal to any of the islanders to use their places of business in the book?
CH: I didn’t. In fact, I didn’t even tell anyone that I was writing a book until I was about sixty pages into it. It was a very personal thing for me. It still is. As for the in-depth Vineyard descriptions, I am really happy with people saying that they really felt like they were on the island. I am really touched by that. People also say that they can tell that I really love Martha’s Vineyard and that’s true. I guess the two are part and parcel. I had just returned from JAWSfest so it was still fresh in my mind. Any gaps I had, I called friends on the island or used Google Maps. That street view feature was awesome for answering questions in my head like, “What the heck was across the street from the Edgartown bus stop??” I love the Internet. I used the Internet for a lot of my research into the history of the island too.

MS: The book has a lot of inside references to the “Jaws” film series that fans will spot. Was that an intentional tip of the hat to the readers?
CH: Absolutely!! Do you think you got them all Mike? (NOTE: I thought I did but the challenging way he asked me tells me I’m do for a second reading) Some were more obvious than others. When I was writing I thought that I may as well have some fun with it. My immediate audience would be “Jaws” fans so “Jaws” references would be a must. My main character is a fan of the film so he would obviously be thinking about “Jaws” locations as he walked or drove past them but I thought why not take it one step further? Why not put a few in there that ONLY hard core “Jaws” fans would get. Like a secret language… That was fun.

MS: As a fellow member of the “Jaws” fan community, I found that several of the characters seemed very familiar. Were any of them based possibly on someone you might know with an entertainment web site?
CH: (laughing loudly) Did you see yourself in a character or two? Well, I haven’t divulged all of the character’s identities exactly. Some are a little more obvious than others and some are amalgamations. Some are completely fictitious of course. It is a novel after all! The villainous characters are completely fictitious and one character is named after a friend who asked me to name a character after them.

MS: How has the book been received by readers?
CH: I can’t get over the positive response and reviews on Amazon! The book is selling well and the reviews have been overwhelmingly great. It really means a lot. It’s one thing to write a book but then to put it out there to be pecked by birds is quite another. It was nerve wracking. My worry seems to be for naught though. I’m very thankful for that.

MS: Is there a new book in the works?
CH: There is. Or rather, there are! I am working on two books right now. One is a follow up to “The JAWSfest Murders.” Charles is back on Martha’s Vineyard to visit Chief Laurie Knickles and it’s not long before there is blood in the water again! I’m really enjoying writing this series. The second book is a collection of horror short stories. I love reading short stories so I’m slowly working on putting a collection together. I have no idea how many stories there will be. I’m playing that one by ear. You’ll get the first copy Mike!

Check out our review of “The JAWSFest Murders”, here

To order your copy of “The JAWSFEST Murders” please visit www.marthasvineyardmysteries.com 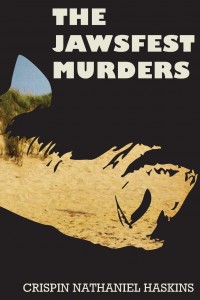 Summer on Martha’s Vineyard is always hectic. It’s been that way for almost four decades thanks to the island being the home location of the popular film, “Jaws.” This summer is especially busy because the fictional Amity Island is hosting the 2nd JawsFest and thousands of fans of the film are expected. Chief of Police Laurie Knickles is already planning on her staff being stretched. But when an apparent shark attack victim shows up off shore she must rely on an old friend for help.

Smartly written, “The JAWSFest Murders” is a tidy murder mystery that is thoroughly entertaining, even if you’ve never heard of the movie “Jaws.” Our hero, Charles Williams, is a fan of the film who plans to meet up with his fellow “Finatics” to celebrate the film they love. Charles is surprised to find that an old friend is now the top cop on the island. An amateur sleuth himself, Charles is intrigued when the Chief tells him about a body that appears to have been attacked by a shark. The irony that it happened during “JawsFest” is not lost on either of them. Only later do they discover that the victim had been shot prior to being dumped in the drink. The Chief captures Charles’ total attention when the name of the victim is announced: Karl Bass, one of Charles’ on-line “Jaws” pals. The plot intensifies as more fans, and friends, mysteriously die.

Part of the joy of “The JawsFest Murders” is exploring the island of Martha’s Vineyard. Author Haskins is so descriptive of the layout of towns like Oak Bluffs, Vineyard Haven and Edgartown that the book almost reads like a Fodor’s Guide. Like I mentioned, you don’t have to know anything about “Jaws” to enjoy the book. However if, like me, you’re a fan of the film, you can look forward to several inside bits, some that sneak up on you. I was 50 pages in before I realized that the majority of the characters were named after the kids featured in “Jaws” and “Jaws 2.” Haskins doesn’t hit you over the head with “Jaws” but gives readers enough information to make them understand the passion of the fans.

“The JAWSFest Murders” is something the actual 2012 JAWSFest wasn’t – Entertaining!

Check out our interview with Crispin Nathaniel Haskins, here

To order your copy of “The JAWSFEST Murders” please visit www.marthasvineyardmysteries.com