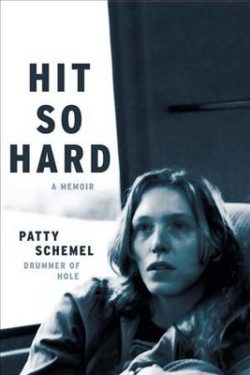 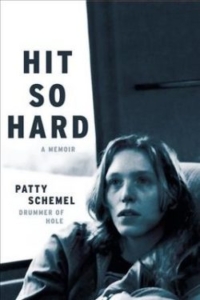 Patty Schemel is a drummer who was at the epicenter of the Seattle grunge scene in the early 1990’s. Schemel is probably best known for her work with the alternative rock band Hole and as a close friend of late Nirvana front-man Kurt Cobain. “Hit So Hard: A Memoir” chronicles the coming of age of a musician and drug addict during her times both on and off the road with a band plagued by tragedy during rock n’ rolls last great era of excess. While never losing her sense of humor Schemel recounts her descent into homelessness and crime and the difficult but rewarding path to sobriety after more than twenty attempts to get clean.

Dominating air waves and headlines around the world in the early 90’s was the Courtney Love fronted band Hole. A band with a volatile mixture of energy, chemicals and attitude who in one moment could provide you with some of the most in your face rock n roll to the next minute being on the verge of imploding like a powder keg. Providing the bands driving back beat and contributing heavily to the four pieces volatile makeup was drummer Patty Schemel. Over the course of “Hit So Hard: A Memoir” 280 pages readers for the first time get the behind the scenes, first-hand account of what made Hole such a great/disfunctional band. Beginning with Schemel’s first introduction to drinking at age 11 and, continuing on through her struggles with sexuality and figuring out just where she fit in the book is a roller-coaster ride of angst and self reflection. From her first meeting with a pre-Nirvana Kurt Cobain to sharing a house with him and Courtney Love at the height of Nirvana’s success Schemel is candid with her accounts and does not shy away from the intimate details.

No “Hit So Hard” is not just another tell all memoir about sex, drugs and rock n roll. Yes there is plenty of that in this book yet, now matter how tempting or prevalent those subjects might be they surprisingly take a back seat to Schemel’s unique life story. The authors laid back delivery and word choice draws in the reader’s attention and tows a fine line as to not over sensationalize certain things that may cause readers to lose the point of each passage. This book was a breath of fresh air in the ever growing sea of memoir release and with the holidays right around the corner “Hit So Hard: A Memoir” could be the perfect gift for that music lover and or reader in your life.