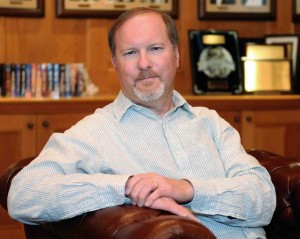 Kevin J. Anderson is the known best for his work in the “Dune” universe working with co-author Brian Herbert. He also co-authored the book “Clockwork Angels: The Novel” with Neil Peart from the band Rush. He is releasing his latest novel, “Hellhole Awakening” this month and working on the next “Dune” novel, “Mentats of Dune”, due next year. Kevin took out some to time to chat with Media Mikes before he hits the road to promote his new novels discuss them and also what else he has in the cards for 2013.

Mike Gencarelli: Tell us about your latest novel “Hellhole Awakening”?
Kevin J. Anderson: Brian Herbert and I have written about a dozen other books together in Frank Herbert’s “Dune” universe. They are all international best sellers and we love diving into that universe. But after doing all those books together we decided to take a crack at our own universe. It is trilogy. “Hellhole” is the first one, which came out two years ago. And now “Hellhole Awakening” is part two and comes out at the end of March. Hellhole is a planet that is struck by an asteroid. Due to that, there are volcanoes, earthquakes, storms and most of the native life forms are extinct. Then you have a bunch of misfits that are trying to colonize it, led by an exiled rebel general. So, these desperate colonists are trying to make a new life for themselves on a very hellish place. We have a lot of various storylines with aliens, disasters, terrific space battles and some other really cool stuff. We are very excited about the trilogy. It is really epic. The story just keeps building after what the first book has set up. (I know I should have a good one-liner to describe it—HELLHOLE is about a colony trying to survive in a place where nobody would want to live. 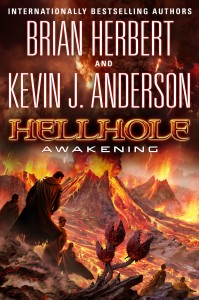 MG: Tell us about how this collaboration with Brian Herbert compares than your other books?
KJA:  We have been doing this since the mid-1990’s and every single year we have a new book out. We have spent most of the time in the “Dune” universe, and we really know how the other person thinks. We play upon each other’s strengths and are able to describe things and tell a story we find engaging. The “Hellhole” books gave us a chance to strut our own stuff instead of using what Frank Herbert developed in the “Dune” universe. It is nice to play with your own toys sometimes.

MG: Also with Brian, How is your progress coming along for “Mentats of Dune”?
KJA:  MENTATS is the second book (after SISTERHOOD OF DUNE) in a new trilogy set about 10,000 years before the original novel “Dune”. It is about the formation of the Bene Gesserit sisterhood and the Mentats School. “Mentats of Dune” will be out next spring. Actually when the phone rang for this interview, I was editing page 100 out of page 651. Brian and I are in our fifth draft, and we will probably go through ten drafts or so until we get it all finalized. We do a book every year, kind of like clockwork… which leads me into my other recent book “Clockwork Angels,” the steampunk fantasy adventure based on the new Rush concept album.

MG: I was just going to ask actually, tell us about the “Clockwork Angels: The Watchmaker’s Edition”?
KJA:  The Watchmakers Edition is the audiobook version of the novel. Not your typical audio book. It is unabridged and read by Neil Peart (the drummer from Rush, with whom I cowrote the novel). Neil has a gorgeous voice and he wanted to do this. This novel is very close to him and me as well. And what could be better than having Neil Peart read it himself? The novel and the audiobook itself were released last September. “The Watchmaker’s Edition” is a very 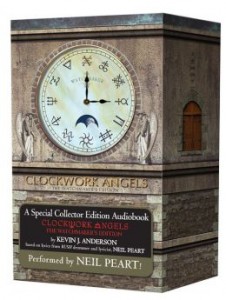 snazzy special edition, with a modeled clock tower with a working clock inside. It has beautiful artwork all around it by Hugh Syme, the cover and album artist. (He’s done all of the artwork for Rush’s albums dating the way back to “2112”. ) It also has a nice poster inside with a timeline for the “Clockwork Angels” project for Rush and my work as well. Any die-hard Rush fan should have this.

MG: Let’s go back, tell us about origin about how this collaboration came about with Rush’s Neil Peart?
KJA:  “Clockwork Angels” is Rush’s latest concept album, like Pink Floyd’s “The Wall” or The Beatles’ “Sgt. Peppers Lonely Hearts Club Band”. It is a steampunk fantasy adventure about a Big Brother figure called The Watchmaker and a crazy anarchist who wants to destroy everything—who meet up with a naive dreamer, someone who grew up in a small town. He wants to visit the big city where the Clockwork Angels are. The world has zeppelins, pirates, steampunk carnivals, and the lost seven cities of gold. Neil and I have known each other for about 25 years. He’s already read my books and I have always been a Rush fan. We’ve worked together a few times. Before CLOCKWORK ANGELS, we did a short story called “Drumbeats.” and Neil wrote an introduction to a collection of short stories I did. When he was developing the story for the”Clockwork Angels” album, I started brainstorming with him just because it was fun. At some point along the way, Neil suggested that this could be a novel also. This novel is something I’ve been waiting my entire career to do. Rush’s music has inspired many of my stories. During their “Time Machine” tour, they came to Colorado (where I live) and on a day off, Neil and I climbed a 14,000 foot mountain—because what else do you do on your day off? During the hike up, we plotted the story and came up with the characters. So while Rush was writing the album, I was putting together the story in my head. I was able to put in little references to Rush lyrics—not just “Clockwork Angels” but the entire library of songs. If you are a die-hard Rush fan, you will catch them, but otherwise the story flows just fine.

MG:What/when can we expect from the third Dan Shamble, Zombie P.I. novel, “Hair Raising”?
KJA: HAIR RAISING is the third installment after DEATH WARMED OVER and UNNATURAL ACTS, and will be out in May. I’ve also done an original story, “Stakeout at the Vampire 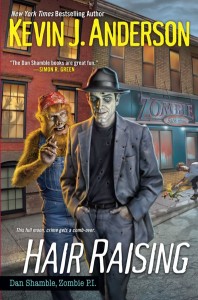 Circus” (available in all eBook formats), and I’ll have another new one, “Road Kill,” out in about a month. This series is a humorous horror series which follows Dan Shamble, Zombie P.I., set in a world where all the monsters come back and live in a part of the city called the “Unnatural Quarter”. In HAIR RAISING, somebody is stalking werewolves and scalping them.
If you can’t tell, I have so much fun with my job. I love telling these stories. I don’t have enough time in the day to put down all the words in my head

MG: Tell us about your upcoming tour to support these?
KJA: I am about to start a US tour for HELLHOLE AWAKENING (San Diego, Dallas, Houston, Seattle, Atlanta, Dayton, Richmond VA, and Colorado Springs)—full tour schedule at http://kjablog.com. Unlike a rock concert tour, I will be there meeting with the fans face to face, give a little talk about working with Brian and Neil, and there’ll be a Q&A, door prizes, lots of cool stuff. I look forward to getting out there and meeting the fans.