Nobody needs to tell us what TVs How I Met Your Mother has done for its core cast – Jason Segel, Neil Patrick Harris, Alyson Hannigan, Cobie Smulders and Josh Radnor – but what about the supporting cast of TV’s most popular half-hour? Well, they’re doing crazy good too!

LYNDSY FONSECA (‘Ted’s Daughter’)
Though her part on the show is a fairly thankless part, Fonseca’s seemingly done quite well out of having the series on her resume. In recent years, the 26-year-old has starred in such movies as Kick-Ass 2 and Hot Tub Time Machine, and also played a lead role on the series Nikita.

CHARLIE AMOIA (‘Wendy the Waitress’)
Amoia, whose comic timing on the series is amazing, displays her versatility in the dramatic short She, playing a depressed young woman who finds an unlikely friend in a rescued dog. The film played at festivals, and has also been featured in several major magazines. Amoia will also be seen in several diverse feature films, including Fat.

JOE MANGANIELLO (‘Brad Morris’)
Though he only did a few episodes (the first in 2006), Manganiello’s appearance on How I Met Your Mother was enough to get him on the radar of near every TV network in town. The actor has played Bon Temps’ resident werewolf on HBO hit True Blood for the past few years, and next appears opposite Arnold Schwarzenegger in a big-time flick called Sabotage.

JAMES VAN DER BEEK (‘Simon’)
Though he was already well-known at that stage (for Dawson’s Creek), former TV heartthrob Van Der Beek wasn’t known for his comedy work. His 2006 appearance on the sitcom changed all that, and before too long he was headlining his own half-hour sitcom – well, a starring role on one anyway (Don’t Trust the B*itch in Apartment 23). Van Der Beek recently returned to the show to reprise the character.

CRISITN MILOTI (‘The Mother’)
Ok, so Cristin only recently made her first appearance on the show but all of a sudden she’s gone from ‘who is that?’ to ‘the How I Met Your Mother actress that’s now appearing opposite Leonardo DiCaprio in The Wolf of Wall Street’. Can only imagine the ‘Mother’ gig helped the 28-year-old actress get the gig.

Michael Bublé is a singer with a voice that just mesmerizes you with each word. There are very few singers around right now that have the class and presence that he has. His voice with big band behind him is a thing of beauty. This type of music is very rare in the age of “fixing it in the studio” crap that we are getting today. Michael’s voice on the album is what it sounds like it he was sitting right in your living room next to you. “To Be Loved” is his sixth official studio album and features 4 original songs, which are co-written by Bublé himself and 10 covers, which are new interpretation of classic songs. I am in love with this album and I foresee this being on my iPhone for many years to come (or at least until the next album).

The originals tracks are “After All” with Bryan Adams, “Got It Easy”, “Close Your Eyes” and “It’s A Beautiful Day”. All four tracks are absolutely amazing. I have to admit It’s A Beautiful Day” has this certain charm that gets me everytime. The classic covers are the Bee Gees’ “To Love Somebody”, Dean Martin’s “Nevertheless (I’m In Love With You)” with The Puppini Sisters, The Miracles’ “Who’s Lovin’ You”, Jackie Wilson’s “To Be Loved”, Elvis Presley’s “Have I Told You Lately”, Randy Newman’s “You’ve Got A Friend In Me” from “Toy Story” and of course what is a Bublé album without some Frank Sinatra songs including “Young At Heart”, “You Make Me Feel So Young”, “Come Dance With Me and “Something Stupid”, which features Reese Witherspoon on vocals taking over for Nancy Sinatra.

What I love about this album most is that you are easily able to just get lost in the music. From the moment the album starts you find yourself immediately singing along and you don’t stop until ends. Even with the new tracks, they are so catchy and after a listen or track you will find that you already know them and can’t get them out of your head. If you are a fan of Bublé, you will not be disappointed at all. If you are new to his music, this would be an excellent way to get introduced. Now if we can only get Bublé can get his butt to Orlando, FL to tour, I will be a very happy camper! 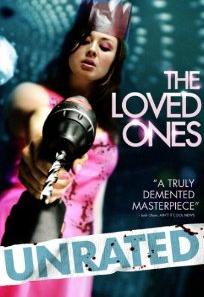 “The Loved Ones” is a a 2009 Australian horror film that is just seeing the light of day in the US, thanks to Paramount.  Australian horror has been known to be extremely intense like “Wolf Creek” and this film is no different.  There is a certain comedic approach to this film, so it leans back a little otherwise it would be so brutal.  As a horror fan, I have to admit that this film was definitely not on my radar but I am very happy to have experience it.  That is kind of the word to use as well.  I would like to compare it if “The Texas Chainsaw Massacre” went to the prom and things get very bloody.

Premise: Hell hath no fury…like a prom queen scorned. When Brent rejects Lola’s invitation to prom, he sets off a chain of events that leave him the victim of her twisted revenge. Now he’s the only guest at Lola’s terrifying and demented prom, and must fight to survive what could be his final dance. Will Brent live through this nightmare of drills, nails, glitter and syringes…or become one of Lola’s “loved ones”?

This film runs 84 minutes and it is perfect timing.  It runs just long enough to leave you with your mouth opening wondering what the hell just happened.  This film is also presented unrated, so you know that this is no PG-13 teen friendly prom horror film.  As far as special features go, there is only a few interviews from the cast and crew.  But I really liked that fact that the film also comes with an Ultraviolet digital streaming copy of the film. Overall horror fans should not miss this film for sure.