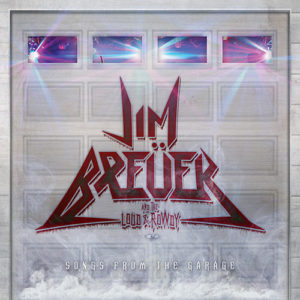 Accomplished comedian Jim Breuer has been mixing his love of heavy metal into his stand up acts for years. Be it through real life stories, impersonations and even adding a live band to portions of his comedy shows. “Songs From The Garage” is the debut music album from the actor/comedian who was a staple on “Saturday Night Live” during the late 90’s. Produced by former Anthrax and current Volbeat guitarist Rob Caggiano the album features 11 tracks which combine in your face guitars and drums with Breuer’s off kilter comedic stylings.

From his portrayal of “Goat Boy” on SNL to his role as the lovable stoner Brian in “Half Baked” Jim Breuer’s comedy is something that I have grown up with so, when I heard he was going to put out an album of actual metal music I couldn’t wait to check it out. Sadly what I found on the albums 11 tracks was a mediocre comedy album with a band playing your typical 80’s style metal in the back ground. There really was just nothing spectacular here. Not even a guest appearance by long time AC/DC front man Brian Johnson on the track “Mr. Rock n Roll” could turn this around for me. Knowing Jim’s love of heavy music and the fact that his backing band consists of Mike Tichy, Joe Vigliotti and Metal Mike Chlasciak (all great players) the two just didn’t mesh well and came off as stale and forced. Aside from a few fun titles like “Raising Teenage Girls” and “Be a Dick 2nite” I just couldn’t find anything that I would listen to more than once.

When a performer crosses mediums it can go one of two ways, either really well or in the case of “Songs From the Garage” really bad. I appreciate the attempt that Breuer and company made on the record however I was torn between the mix of comedic tracks and those that were more serious as it caused me to question the direction of the album. Was it meant to be a serious attempt at a metal record or just another comedy record with musical elements? I think the album would have come off as way more cohesive if that common element was defined clearly. Yes I understand Jim Breuer is a comedian so there will undoubtedly be comedic elements to his works but, knowing his level of musical fandom especially when it comes to rock and heavy metal music it makes me question why he did this the way he did.

The raining kings of spandex metal are back with something a little different this time around. “Live From Lexxi’s Mom’s Garage” is the bands first full length feature film which includes a live 10 song acoustic concert mixed with comedic scenes that show case the bands over the top sexually fueled high jinks. The dual CD/DVD is being released via Open E and features 10 tracks that will have you instantly reaching for the aqua net and eyeliner.

Right of the bat “Live From Lexxi’s Mom’s Garage” was a hit for me. The band wastes no time getting right down to business as the album is a spattering of songs from the bands 3 comedic tinged albums but with an acoustic flavor. Songs like “Party Like Tomorrow is the End of the World” and “Glory Hole” sound as good if not better than the original records. Despite the fact that acoustic instrumentation can be a bit unforgiving especially in live situations the band does an impressive job with each performance. Combine that with a great mix provided by Jay Ruston and you have an album that’s not only fun to listen to because of the songs tongue and cheek subject matter but also because it’s pleasing to the ears and you get to a hear new track from the band titled “That’s When You Came In”. Yes the album is a bit polished for a live album however, keep in mind that very few live albums are truly live making this a moot point. Along with the audio version of the CD fans get a video version of the show which only adds to the entertainment value of this release. Though I found a couple of spots where the audio seemed to be a touch out of sync the brief skits every few songs were funny enough to where you could look past any short comings. Throw in a couple special appearance of 80’s video vixen Bobbi Brown in the role of Lexxi’s mom and you have yourself a pretty killer package.

Yes some of the sexual innuendos used in “Live From Lexxi’s Mom’s Garage” have started to become a bit tiresome however the catchiness of Steel Panthers songs are what keep me coming back time and time again. For long time fans of the band picking up this release is a given. For those new to the group despite having three studio albums under the bands belt I recommend starting here a working your way backwards as the songs just sound so good played acoustically. For those wanting this for just the video performance be warned that that is all you will get on the DVD there are no behind the scenes or bonus footage here. Knowing the bands comedic nature I would have thought there would have been tons of outtakes and gag reels from this shoot that could have been included but when you are already getting both the audio and video version of the show for the price of one you can’t really complain.