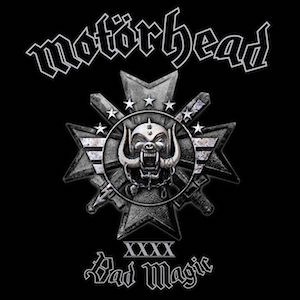 Motorhead the band that goes one louder brings you their latest studio offering “Bad Magic”. The album which was produced by Cameron Webb and released via UDR is the bands 22nd studio album and features 12 brand new tracks from the Lemmy Kilmister fronted group along with a unique cover of the Rolling Stones classic “Sympathy for the Devil”.

For me personally Motorhead ranks right up there as one of the most killer hard rock/heavy metal bands. Not only has the band been rattling speakers since the mid 70’s but they are one of the few solid acts from that era still putting out new music on a regular basis that still holds true to the bands original sound and style. “Bad Magic” is the latest offering from the band and sadly I just couldn’t get into the album. From a production standpoint the album is very tinny with little to no low end. At first I had thought something was wrong with my speakers but after about the 5th track I realized it was what it was. Though there were some notable performances such as the aggressive “Evil Eye” which features some great drumming by Mikkey Dee and the ballad like “Till the End” which contains an impressive solo from Mr. Phil Campbell other mentionable high points were few and far between.

Ultimate Motorhead fans will certainly want this for their collections because where else are you going to find Lemmy performing a Rolling Stones track? However if you’re a more casual listener or looking for a starting point in Motorhead’s impressive recording career I highly suggest starting at the beginning and working your way forward.