Media Mikes has teamed up with our friends at Lionsgate Films to give (50) of our Kansas City-area readers and a guest the chance to be among the first to see the new film “Last Flag Flying,” starring Steve Carell, Bryan Cranston and Laurence Fishburne.

The screening will be held on Monday, November 20, 2017, at the Cinemark Palace on the Plaza Theatre and will be begin at 7:00 pm

All you have to do is head to: http://www.lionsgatescreenings.com/Anuqb53721 and download your pass.

This is a first come/first served giveaway.  Once (50) admit two passes have been downloaded the giveaway is ended. 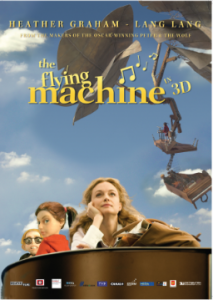 I am a big fan of fantasy family films. I am also a big fan of music. This film is a mix of both but really feels a light on both areas. The film is being released in 3D and it includes a fun blend of stop-motion, 2D animation and live action.  Though I did not have the privileged of viewing this in this 3D format. Since the film was shot mostly on a green screen that the third dimension would have made this film include the added depth it yearned for.  Without it, I feel the film is very flat and not very exciting. Also for the first 20-30 minutes, the film is told through music without any talking.  This is a brave move but for a kids film, I just keep thinking about how their attention span was gone after five minutes.

Official Premise: The film takes off in London when over-worked single mum, Georgie takes her children, Jane and Fred, to see The Flying Machine, a film being accompanied live by super-star pianist, Lang Lang, playing Frederic Chopin masterpieces. The film, which we get to watch as well, is called “The Magic Piano”. Jane and Fred are enchanted, but as soon as they leave the cinema, their mother Georgie is right back on the phone. When she finishes her call she notices the kids are gone. They were engrossed into the magical world of the Flying Machine that they have flown away with it. Georgie, with a little help from Lang Lang, follows Jane and Fred on their way to Warsaw where Chopin’s is buried. On her way she gets to understand how much was she missing and how much she loves her kids.

Let’s get the acting, boy is it rough.  Heather Graham is extremely amazing…at over-acting.  I hate to bash her performance since it is a kids film but every time she delivers a line it just hurt my ears.  Lang Lang is a fantastic Chinese concert pianist but as an actor…well…let’s just say he should stick to tickling those ole ivories. I really wanted to this film to work since I am My favorite part of this film was the various types of animation but that isn’t enough for me to recommend this to anybody. If you want to see for yourself the film is available now on VOD provides including most Cable Providers and online with Apple iTunes, Vudu and Amazon Video On Demand. But I warned you! 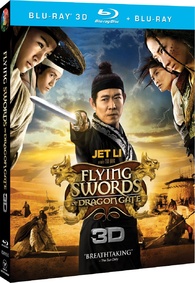 “Flying Swords of Dragon Gate 3D” is a re-imagining of 1992’s “New Dragon Gate Inn”. It is a real kick-ass action film, which gives Jet Li a chance to shine. After seeing “The Expendables 2”, his role was so trivial and  I was dying for some real Jet Li action. If that isn’t cool enough this is directed by Tsui Hark. who has directed some of my favorite films like “Zu Warriors from the Magic Mountain” and the “Once Upon a Time in China” series, also starring Jet Li. The film was shot entirely in 3D and really looks amazing, thanks to Chuck Comisky, the visual-effects supervisor for James Cameron’s “Avatar”. Highly recommended for all fans of Li or action in general.

Official Synopsis: Three years after the disappearance of the enigmatic innkeeper Jade and the massive fire that consumed the Inn, a new Dragon Inn has risen from the ashes, staffed by a band of marauders. Masquerading as law-abiding citizens by day, they use the cover of night to continue their true calling as fortune hunters. For legend says that the Dragon Inn is the site of a lost city buried in the desert – and a treasure that spans dynasties hidden deep within. As they await a storm strong enough to unearth the hidden fortress, they are surprised by the arrival of a pregnant concubine and her mysterious protector, Ling. They have come seeking the sanctuary of the Inn – as two factions from the Imperial City close in on them to claim her unborn child. Leading the Imperial Assassins is the merciless Eunuch, Yu who hopes to reclaim the Emperor’s child before she can fall into the hands of the righteous General Zhao.

The 1080p transfer is extremely impressive within its 2.39:1 aspect ratio.  Besides the 3D action, which is amazing, Cinematographer Choi Sung-fai delivers some beautiful colored landscapes, which real pop. This also goes the same for the 2D version of the film, I just prefer and recommend watching it in 3D. The DTS-HD Master Audio 5.1 audio track is perfect but only its original Mandarin language.  The English track is unbearable to listen to and turns the film into a comedy with the voice overs.  The only problem is that I am not a big fan of reading subtitles in 3D but it is really the only way to watch it.

The special features are found on the standard 2D Blu-ray disc and are good but they are also only in SD.  Firstly, there is a two part “Making of Flying Swords of Dragon Gate”, which both together runs about 15 minutes.  There is a look into some of the film’s production but looks like it was shot on a cell phone.  There is about 20 minutes of interviews with the film’s cast and filmmakers.  There is another 30 minutes feature looking behind-the-scenes, which includes some good detail but has some sound issues.  Lastly there is a trailer included for the film. 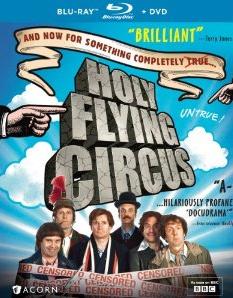 When it comes to anything Monty Python, I am in like flint. This docudrama focuses on a few subjects that Python has been known best for censorship And scandals. I was curious to see how this film would work without any actualy members of the group but it didn’t disappoint at all. It was funny and completely zany in perfect Python traditions. It showcases animation sequences, cross dressing, fantasy sequences and just everything else that made Python work at Python. It is a fantastic tribute to the Monty Python troop. Any true fan of Monty Python should not miss out on this release for sure

If you are wondering what this film is, it is not a new Monty Python film. It is a “Pythonesque” docudrama which reimagines the controversy surrounding Monty Python’s 1979 film, “Life of Brian”, as it was met with widespread outcry and accusations of blasphemy. Michael Palin (played by Charles Edwards) and John Cleese (played by Darren Boyd) plan to appear in a BBC talk show about “Life of Brian” with a Church of England bishop and a staunchly Catholic broadcaster. The debate which ended up putting the Pythons in their most absurd role yet: the voice of reason.

“Holy Flying Circus” comes in a Blu-ray/DVD combo pack. It’s video transfer is only presented in 1080i, though it looks decent. The audio track included is also a little tame with its 2.0 stereo PCM track but work with what is given in the film. The special features on the release are nothing special. There is a brief but interesting “Making of the Holy Flying Circus” phonotrope. There are a three deleted scenes and an outtake reel, worth checking out if you enjoyed the film for sure. Lastly there are production stills included. 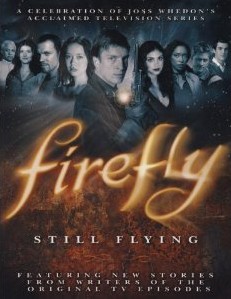 If you are fan of “Firefly”, then you don’t even need to read this review. You NEED to own this book. It is a great continuation of this very short-lived series. This is the third companion book release for the show. You can tell that this book is specifically aimed at the fans and made for the fans, though if you are not a fan then this book is definitely not for you.

This book celebrated the continued longevity that this show has endured over the years. It features many rare and never before seen images, as well as storyboards, production design art and behind the scenes photos of the cast and crew. If you are one of the “Browncoats”, then this book also has a great tribute to them. If all that isn’t enough for you there is more…there is NEW “Firefly” fiction from the original writers of the TV series. Included is “Fun with Dick and Jayne” written and drawn by Ben Edlund, “What Holds Us Down” by Jane Espenson, “Crystal” by Brett Matthews and “Take The Sky” by Jose Molina. These are super cool and worth it for the price of the book alone.

There is still more included in this book, with each character having their own section. Included are photos from the show accompanied by quotes about their own character. The photos in the book are very clear and extremely detailed. Like I said this is a great companion to the series but it is specifically for big fans or as we are known “Browncoats”.

There is always something about the gags, hijinks and mischief of Tom and Jerry.  The unspoken duo have always managed to make me smile and laugh out loud.  The “Fur Flying Adventures” collections are a great have included some of the great episodes and this volume is no exception. The humor of Tom and Jerry is so timeless and can be enjoyable through many generations and will hopefully live on for many many years to come.

The 14 episodes included are “Ah, Sweet Mouse-Story of Life”, “Bad Say at Cat Rock”, Jerry, Jerry, Quite Contrary, “Beach Bully Bingo”, “A Life Less Guarded”, “Northern Light Fish”, “Doggone Hill Dog”, “Love Me, Love My Mouse”, “Sasquahed”, “Shutter Bugged Cat”, “Snow Mouse”, “The Unshrinkable Mouse”, “Spook House Mouse”, and “Don’t Bring Your Pet to School Day”.  All of the episodes are great.  There is a mix of the old classics and some new updated ones as well.  Overall it is a great collection.

Synopsis: Take one blue and white domestic cat. Add one small brown house mouse. Mix in a handful of chases, stir in a few falling anvils and top off with one brutish bulldog named Spike. Yields 14 delightful cartoons! This fast and funny collection rises to the occasion with a crazy camping trip (Sasquashed), a chase through a carnival?s haunted house (Spook House Mouse), an Alaskan adventure (Northern Light Fish Fight) and an encounter with an abominable snow rodent (Snow Mouse).  But the most outrageous moment of all comes when Tom and Jerry set aside their differences and join forces against beach muscleheads Spike and Butch in Beach Bully Bingo. If you are looking to compare the best slot sites, you can have some endless fun as the main course served up in this new all-family feast of animated fun.