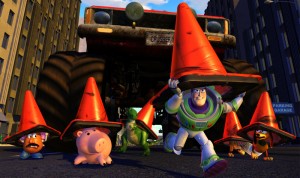 Overall Score: 5 out of 5 stars

I still remember going to the movies with my wife (then girlfriend) and her family on Thanksgiving 1999 to see this film. This film was so highly anticipated and delivers such a great cinema experience. This sequel took what was great about the first film and really amped it up to the 10th degree. This film was released in Disney Digital 3D in 2009 ten years later and I got a chance to see it again. The experience was so enhanced as this film is so epic. This 3D Blu-ray is such an amazing transfer to Blu-ray disc. I would go as far and say that this is a flawless release. The video on the film is again fantastic and surpasses the first film in many ways. The sound is also very impressive with its DTS-HD Master Audio 5.1, especially since this film is so action packed. Overall it is such a great experience and a truly fantastic way to view this film.

The special features are in depth but are a little lighter than the first film. Of course first includes is an audio commentary with director John Lasseter, co-directors Lee Unkrich and Ash Brannon, and co-writer Andrew Stanton. The commentary is very entertaining and delivers some really great information. The next is a second featurette continuing from the first called “Toy Story 3 Sneak Peek: The Characters” and explores the new characters. Like the first disc as well they have more shorts including “TS2 Sleep Deprivation Lab”, “Pinocchio” and “The Movie Vanishes”. Always great to watch. “Buzz Lightyear Mission Logs: International Space Station” is an virtual tour aimed to entertain the kids. “Paths to Pixar: Technical Artists” chats with the artists about their personal experiences with Pixar. “Pixar’s Zoetrope is a quick three-dimensional zoetrope, inspired by Studio Ghibli. “Celebrating Our Friend Joe Ranft” is a very great feature on the tribute to story artist Lasseter calls “the heart and soul of Pixar.”

The rest of the extras arre taken from the past DVD releases. “Making Toy Story 2” is a behind-the-scenes featurette diving into the sequels development. In “John Lasseter Profile”, we dive into the head of Pixar’s leader and it’s future. “Cast of Characters” focuses on the new character appearing this sequel. I think some of the best features is “Toy Box” which includes outtakes, easter egg and other great suprises including “Riders in the Sky Music Medley”, and Tom Hanks and Tim Allen arguing over “Who’s the Coolest Toy?” Definitely some good stuff. There are three unfinished scenes including a “deleted animation intro,” “Godzilla Rex,” and an early version of the “Crossing the Road” scene. Also like the first film, there are features about the “Design”, focuses on the effects and “Production” which has five more features describing the behind the scenes. The next featurettes chat about the sound and music including “Designing Sound,” “Making the Songs,” “Woody’s Roundup Music Video,” and a Randy Newman demo for “Jessie’s Song.”. Lastly there are promotional videos including two trailers, over ten TV spots, twenty domestic and international posters and more. Great features less than the first but still great.