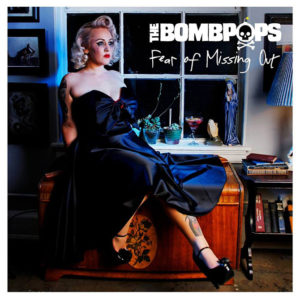 “Fear of Missing Out”
The Bombpops
Fat Wreck Chords
Tracks: 12

San Diego punkers The Bombpops are set to explode with their first full-length album titled “Fear of Missing Out”. Released via Fat Wreck Chords the 12 track album is the follow up to the bands 2015 self released EP titled “Can of Worms” and hits with a sound and energy that harkens back to punks resurge in the 90’s.

Fat Wreck Chords has a long and fabled history as one of the independent leaders of punk rock music so whenever I get a chance to check out a new release from them I jump at the chance. Right from the albums opening track “Capable of Lies” to the closing notes of “All in a Day’s Lurk” the album is two parts nostalgia and two parts new as the 4 piece band consisting of Poli van Dam, Jen Razavi, Josh Lewis and Neil Wayne provide listeners with 90’s styled pop-punk fueled with modern day angst. Tracks like “CA in July”, “Watch Me Fold” and “Sweet for Sorrow” are definitely worth noting as they provide a perfect example of my previous statement.

If you were ever into bands like Dance Hall Crashers or Save Ferris then you definitely owe it to yourself to check out The Bombpops and their latest release “Fear of Missing Out”. Not only does the band/album provide a new take on a familiar sound each track’s catchiness is through the roof making it an album you can throw on repeat and listen to multiple times. 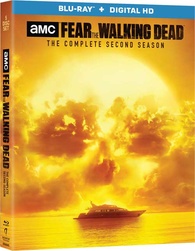 Man I tried, I tried! I really hated the first season of “Fear the Walking Dead”. It just felt so unnecessary and I did not like anyone from the cast at all as characters and actors. I said I wasn’t going to watch the second season of this show at all…but I gave in. The second season is a little bit better mostly because it expands from the original 6 episode order but I still found myself cursing the cast and just not enjoying the series at all. If you are obsessed with all things “The Walking Dead”, I am sure you will enjoy but I will pass on this series.

Official Premise: Last season, ‘Fear the Walking Dead’ explored a blended family who watched a burning, dead city as they traversed a devastated Los Angeles. In Season 2, the group aboard the Abigail is unaware of the true breadth and depth of the apocalypse that surrounds them; they assume there is still a chance that some city, state, or nation might be unaffected some place that the Infection has not reached. But as Operation Cobalt goes into full effect, the military bombs the Southland to cleanse it of the Infected, driving the Dead toward the sea. As Madison, Travis, Daniel, and their grieving families head for ports unknown, they will discover that the water may be no safer than land.

“Fear the Walking Dead: The Complete Second Season” Blu-ray comes with a Digital HD of the season as well. The special features are decent and worth visiting IF and only if you like the show. There are a bunch of audio commentaries included with cast/crew. watched through the commercials included are the “Flight 462” webisodes. There is the Q&A with Cast and Creative Team from Paley Fest LA 2016. Lastly there are two featurettes going behind-the-scenes “Inside Fear the Walking Dead” and “The Making of Fear the Walking Dead”. Some decent content there but this show still doesn’t do it for me. 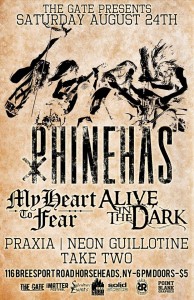 Red Chord Records artist Phinehas brought their 2013 summer tour to The Gate located in the upstate NY town of Horseheads, NY on August 24th. The group who hails from Los Angeles is currently out on tour in support of their newest EP release titled “The Bridge Between”. Though the crowd on hand was of the smaller size all the bands who performed that evening gave their all in an effort to put on a great performance.

Take Two would hit the stage first and though the group experienced a few technical difficulties not of their own doing the local 5 piece punk/rock band forged through like professionals and did what all good openers do by priming the crowd for what was to come later in the night. Praxia another local band from the area would follow with their own unique style of metal core which definitely kicked things up a notch. Advent recording artists Alive in the Dark were up next and started off their set as though they were shot out of a cannon. The band certainly seemed to be enjoying themselves especially drummer Michael Guevarez who donned a creepy yet entertaining unicorn mask for a portion of the set.

Next up were Solid State Records artist My Heart to Fear. The band hails from Williamsport, PA an area probably best known for its baseball history however over the last few years have become a breeding ground for up and coming metal-core acts. Vocalist Trevor Pool worked the crowd in between songs which helped keep the excitement going and even though the bands tour van broke down between shows none of the members let that affect their performance which garnered a great response from the crowd.

Closing out the night were tour headliners Phinehas who put on a stellar performance from start to finish.
Each of the bands four members really put everything they had into the extended set which whipped the crowd in to several good sized circle pits. Guitarist Jason Combs and bassist Bryce Kelley made great use of the stage as they bounced and spun back and forth while delivering the bands crushing material. Drummer Lee Humerian was a show in his self dazzling the crowd with a bevy of stick twirling tricks while vocalist Sean McCulloch put the icing on the cake with his shredding vocals and commandeering stage presence.

I really have to give it to the people who handle The Gate. Not only do they provide a safe and fun environment to play and listen to music but they seem to be the only ones in the area that are doing anything for music fans and performers. Without their dedication to the art of music younger bands and listeners would have little to no chance to perform or experience some of the great music that is out there. Definitely keep up the good work!