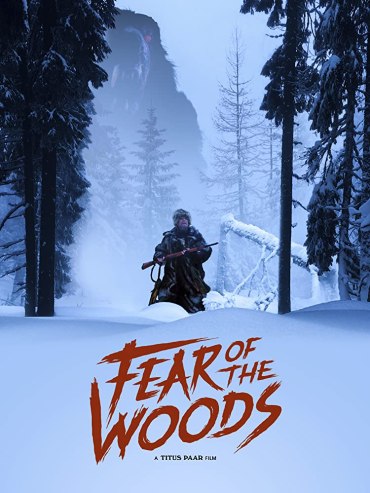 Titus Paar is the director of the new upcoming survival horror film “Fear of the Woods”s starring Vernon Wells (“Commando”, “The Road Warrior”). The film just released it’s trailer to the world and has been taking over the internet since doing so.

Here is the official synopsis for the film is “Alaska 1993, A snowstorm has trapped the small mountain town. Now it’s up to a group of rebellious teenagers to save their town that don’t believe in monsters.’

The film boasts a fully animatronic bear with no CGI and looks absolutely killer (see the trailer below). Media Mikes had a chance to ask Titus a few questions about the film and also his work with Steven Seagal.

What made you want to make a killer bear movie with “Fear of the Woods”?

When I was around 6 years old I saw the anime Silver Fang for the first time, it blew me away and that bear was the coolest monster I had ever seen (And still is)As I started making movies around 15 the dream began of one day making a live action movie called Fear of the Woods and capture the essence of the Bear in Silver Fang but with a new story.And now here we are, 30 years older making that kids dream come true.

Tell us about the decision to use an animatronic bear and no CGI for the film?

My style of directing is to mix something old and familiar with something new that I made up. I just make movie I want to see but doesn’t exist, from a fan of film standpoint.This is a retro creature movie and I wanted to pay tribute to the guys that did it all in camera.And once I found out that we had an amazing creature work shop in Sweden called fixas.se it was nothing to think twice about.With movies like Jaws, you see its fake but you don´t care because it was there for real, that shark existed and moved like that and ate the actors. Same with our movie, we had that animatronic bear in arctic temperatures, with the maker of the creature, inside the bear operating him from inside so he could walk and run, while another guy controlled the head, mouth, eyes, smoke machine. So much fun and man but so much hard work.

I have a feeling this was a difficult shoot; Can you tell us a little about the production?

This film truly was a struggle to make in every way. The sun went up at 9 and pitch-black at 3 so we didn’t have lunch breaks or any break really. There was two meter snow so you couldn’t walk without falling and sinking down to you belly and you know I got 74 year old Hollywood star Vernon Wells coming in. And he is supposed to be running in this with a 20 kilo coat on him, being chased by an animatronic bear in tracking shots and VFX setups… So yeah everything was hard. It´s just hard being outside in that kind of cold and we where shooting up on a mountain.But the team is used to work in these conditions and my DP Marcus Möller is one of the beat nature DPs there is so he was a big life savior. Big Camera rig, running with snow shoes all days because the director wanted to have long sweeping takes 🙂 But hey it was worth it, it looks amazing.

Insane shoot for sure. Think we all lost a bit of weight falling around in that snow, digging out the snowmobile while battling the clock. I hate filming in studios, this was a true adventure and it shows in the film. Below is the location and the film is by Marcis Möller:

Tell us about the tagline “Jaws meets Strangers Things and Silver Fang”?

Its not the tagline but I want my influences to show. This is a combination of these things mashed together in my imagination where I just take stuff that makes my blood pump and the only read thread is me liking it really. Jaws, Jurassic park and yeah the way Spielberg makes creature movies, where the film around the creature is so interesting that the film works even if you take out the creature. Stranger Things for the homage to a time period, we are in the 90s in my movie. But it’s our version of the 90s like Stranger Things is using the 80s but making it their own universe. Silver fang is the horror in snow and the idea to bring Akakabouto to life.

How did you get “Mad Max 2″/”Commando” star Vernon Wells to appear in the film?

Vernon and I have been friends for like 10 years. Tried to make a few movies before but movies fall apart all the time, it’s a miracle when they get made.Managed to make one together before, he has a fun part in my crazy Seagal movie Perfect Weapon. Love the guy. Grew up watching him in Mad Max and wanted to look like him (I still sport the Wez mohawke) He is a great actor and I mean he is movie history, I hope he gets to make bigger films again after this, he’ll win some awards for this role, some of his best work ever.

I read he also did all of his own stunts at the age of 74?

Yeah that man doesn’t complain. I asked him if I was going to bring in a stunt double and MZ stunts was ready to bring in a guy (I mean I did a Seagal film and Seagal has a stunt double for walking and he is 12 years younger than Vernon) He just looked at me and said. I’ll be alright as long as I can use my wheelchair… What do you think? I´m a fucking 80s action star I do all my own stunts. Well what can I say, he did almost kill Arnold (Schwarzenegger) and Mel (Gibson)…

Now that the trailer has been tearing up the internet; when can horror fans expect the release of this film?

We are still in post on the film but we will do some festivals first. Want to win some awards for this and we will. So when the world opens up there are a lot of horror festivals around Halloween that will showcase it. But we also want to compete in mainstream festivals with this one, it has something fresh and people really dig it. Makes me so happy. You never know when you make these little more out-there movies if anyone else but you will like them.So it makes you very happy when they do. I have seen both sides, I won so many awards and gotten 5 star reviews many times but also been bashed like hell online and in reviews. So it’s nice to be praised for sure.

Your previous film “The Perfect Weapon”, starring Steven Seagal, was recently #1 on Netflix; what was it like working with Seagal?

Seagal is a hard man to work with. But I knew that walking in to make that movie so I was prepared for it.It was fun doing a 80-90s B-action tribute with him, Vernon Wells and Richard Tyson from Kindergarten Cop. It was never clear in the marketing like I wanted that the movie is an ironic tribute to the B-action genre, so it was bashed for being too B. But that was the point to make the ultimate B movie. It did very well financially, was released worldwide by SONY even went theatrical in Japan and Dubai.The film brought me to Hollywood so I´m grateful to Seagal for taking a chance on me, but I would not do another Seagal movie. Working with much better and bigger talent now on my upcoming movies, you´ll see soon.I´ll say this doe, I like that Seagal is just like you expect him to be, he is larger than life, it’s not an act he puts on, I get bored easily but I was never bored hanging around with Seagal. I got so many good Seagal stories but I only tell them to people that buy me a drink.

Hey thank you Media Mikes for caring about my little crazy movie, means the world to me and the team that made it.Hope you get to see it in a festival or a platform later this year. Looking forward to hear your thoughts.