While using Funzpoints to play free casino games online is a great way to kill time, you just can’t beat also playing your favorite video console games. The two leading players in the console market are still Sony’s PlayStation and Microsoft’s Xbox. Both companies are due to release new machines soon with the PS5 and Xbox Series X already getting lots of headlines. These next-gen consoles look set to push the envelope in terms of what video gaming offers and they have lots of gamers very excited.

But just what can we expect from the PS5 and Xbox Series X when they launch?

First up, why don’t we take a look at the next flagship console from Sony? While an exact release date is not known, it is expected to drop around the latter part of 2020 – possibly in time for the holiday season. With a price tag that many predict will be around the $500 mark, it seems inevitable that some cool new tech will be inside.

One thing you will notice right away is that you have more control in configuring what is stored on the machine and which parts of which games will take up precious memory. That is down to Sony using SSDs in the PS5, rather than hard drives as in previous machines. 825GB of SSD for storage should mean you always have plenty of room for that crucial saved game. The PS5 is also due to run on an AMD CPU chip. It is the latest in the line of AMD’s Ryzen processors, and it is an eight-core monster chip custom-made for Sony.

Gorgeous graphics will come as standard

The net result of such a powerful CPU capacity is a console that will deliver amazing graphics to players. There is the facility to support ray tracing, which is a Hollywood style effect of making everything look that bit more realistic. It is thought that this console will also support 8K resolution to give games truly eye-popping, smooth visual appeal. In terms of audio, 3D sound tech will make for crystal-clear soundtrack.

When you also add in the faster load speeds which the SSD technology offers, it is evident that the PS5 is a real step forward from the PS4. Of the details Sony has released to date, the last significant change is the introduction of new DualSense controllers. They have cool new looks and features like built-in microphones to enhance the gameplay.

What about the Xbox Series X?

In console wars, Mircosoft’s Xbox is still the main rival to Sony’s PlayStation. That makes the planned release of the new Xbox Series X around the same time as the PS5 major news. Microsoft has been quick to promote its new machine, and the company claims it will be the most powerful and advanced console ever. But what does it have to allow it to compete successfully with the new PlayStation?

The first thing you will notice is how it looks. Microsoft has gone for a funky tall tower design, which certainly catches the eye. There is also a newly redesigned Xbox controller to enjoy with textured dots on the triggers for a more tactile feel. 8K resolution has been mentioned by Microsoft with up to a mind-boggling 120 fps rate to tempt players!

What else does the Xbox Series X look to include?

This looks to be a machine with some serious firepower under the hood. 1TB SSD tech will give very fast load speeds while there will be 16 GB of RAM that will also provide support to external storage devices. The graphics may be slightly better than the PS5 as the Xbox has 12 teraflops of graphics muscle compared to the 10.3 the Sony machine includes. That, along with dynamic latency input tech and awesome CPU power, will give some truly astonishing 3D visuals.

The games that Microsoft has in store look set to make the most of all this tech, with Halo: Infinite, Assassins Creed: Valhalla and Scorn, set to thrill when released. They should certainly be a big step up from older games like ‘Star Trek: The Game’ on the Xbox 360! Many think it will be at a similar price point to the PS5, and this, along with full backward compatibility, makes it a serious competitor for the title of the best console.

As the above shows, both consoles will be coming out around the same time and are likely to cost around the same money. With both also having seriously impressive specs to enjoy, the battle for supremacy between them will be exciting for anyone who loves gaming. Which one you choose will be a personal thing, but it is unlikely you will be disappointed with either.

It’s often asked what’s the best way to end a basketball season, and there are quite a few opinions out there. Some live for the NBA playoffs, while others prefer March Madness. You even have those who ignore the real game and instead prefer to play the likes of NBA2K19. For us, it’s all about the college game and March Madness.

So what can we expect this year? Well, the answer to that is to expect anything. It really is one of those seasons when anything can happen and that’s why there’s so much excitement around this year’s finals. It also makes it one of the most interesting NCAA tournament for those who like a little wager on the game.

Of course, while betting on the NBA is a thing, the NCAA is new ground for some. Even so, it’s one of the busiest periods of the year for sportsbooks, as fans bet on who will be the next shining light to make the step up to the NBA.

This year we’re likely to see Baylor as the overall top seed, while the Bears are running them pretty close, as are San Diego State.

Interestingly, neither San Diego nor Baylor have ever been No.1 seed, so this throws up all kinds of questions. Can they handle the pressure? Will the weight of expectation be too much for them? It’s too early to call a winner or even who will progress beyond the first game, but it sure will be a great tournament to watch with several teams in incredible form.

As for players, there are a few individuals worth keeping an eye on even if their teams don’t go too deep in the tournament. James Wiseman of Memphis is expected to be the top-ranked prospect when it comes to the NBA draft. Cole Anthony of the Tar Heels and Isaiah Stewart of the Huskies are also exciting players to watch and could pull their teams through single-handedly!

But you know what? We could sit here and analyze the hell out of player stats and team form, but that’s not what this tournament is all about. It’s called March Madness for a reason, and the excitement that builds up around the tournament is like nothing else you’ll experience. So grab your popcorn and sodas, and settle in for a wild few weeks of incredible basketball and a few surprises. Pure entertainment at its very best.

Lionsgate is releasing WHAT TO EXPECT WHEN YOU’RE EXPECTING on May 18th and Media Mikes is proud to give you the opportunity to attend an advance screening in the Orlando FL area. If you would like to advance tickets, “LIKE” our Facebook page and post “Expecting”. If you’re already a fan of our Facebook page, just head over and post “Expecting”. Only one entry per person, per household; all other entries will be considered invalid.

If you would like tickets to this film, head over to http://www.gofobo.com/RSVP and enter the following code (ALL CAPS): MEDIAMU137.  This is first come first serve and will sell out FAST!! Get it quickly!!

The screening details are:
Monday, May 14th
AMC Altamonte
7:30pm

Check out the official website for the film: http://www.whattoexpectthefilm.com/ 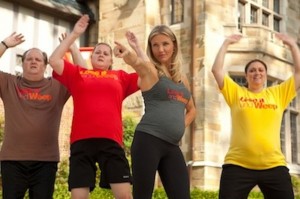 WHAT TO EXPECT WHEN YOU’RE EXPECTING, inspired by New York Times bestselling “bible of American pregnancy,” tells the hilarious and heartwarming stories of five couples who face the many challenges adjusting to pregnancy and parenthood.  The film features a star studded cast including Cameron Diaz, Jennifer Lopez, Elizabeth Banks, and Chace Crawford!

Cameron Diaz stars as ‘Jules’ in WHAT TO EXPECT WHEN YOU’RE EXPECTING.
Photo credit: Melissa Moseley

Inspired by the perennial New York Times bestseller of the same name, WHAT TO EXPECT WHEN YOU’RE EXPECTING is a hilarious and heartfelt big screen comedy about five couples whose intertwined lives are turned upside down by the challenges of impending parenthood.

Over the moon about starting a family, TV fitness guru Jules and dance show star Evan find that their high-octane celebrity lives don’t stand a chance against the surprise demands of pregnancy. Baby-crazy author and advocate Wendy gets a taste of her own militant mommy advice when pregnancy hormones ravage her body; while Wendy’s husband, Gary, struggles not to be outdone by his competitive alpha-Dad, who’s expecting twins with his much younger trophy wife, Skyler.  Photographer Holly is prepared to travel the globe to adopt a child, but her husband Alex isn’t so sure, and tries to quiet his panic by attending a “dudes” support group, where new fathers get to tell it like it really is.  And rival food truck chefs Rosie and Marco’s surprise hook-up results in an unexpected quandary: what to do when your first child comes before your first date?

A kaleidoscopic comedy as universal as it is unpredictable, WHAT TO EXPECT WHEN YOU’RE EXPECTING finds humor and uplift in all the unexpected trials and triumphs of welcoming a child into the world.  The film stars Cameron Diaz, Jennifer Lopez, Elizabeth Banks, Chace Crawford, Brooklyn Decker, Anna Kendrick, Matthew Morrison, Dennis Quaid, Chris Rock, Rodrigo Santoro, Ben Falcone and Joe Manganiello.