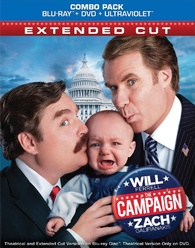 Not sure about everyone else, but I am sick and tired of all the political bullshit that has flooded the web and TV in the last few weeks. I am not a fan at all. I think the @ShitMyDadSays twitter feed has described the election process best “Anyone who thinks they know what’s best for 300 million people is a titanic asshole. So we’re just voting for king of the assholes.” Amen. So, this film was the answer to my prayers! It was a big FU to all things dealing it politics. It was completely raunchy over-the-top and in your face. I commend Jay Roach for finally returning to funny films, unlike the shitty “Meet the Parents” franchise. Will Ferrell is also at the top of his game in his funniest role since “Step Brothers”. Combine his performance with Zach Galifianakis’ belly-laughing character and it is a match made in heaven. The extended cut is actually a real nice improvement from the theatrical and contains an additional 11 minutes of hilarity. Don’t miss this film! Best comedy of the year, no question!

This release comes in a Blu-ray + DVD + UV Digital Copy combo pack. I love that Warner’s is known for this format and I love the use of Ultraviolet digital streaming! The video and audio on the Blu-ray does look great and the DTS-HD Master Audio 5.1 works perfect with the dialogue and the music.
Alright if you are looking for some deep production filled special features and great commentary tracks you are going to be very disappointed. But if you are looking for just some more madness and insanity continued from the film than you are going to like these extras. There is a Line-O-Rama, which is just a laugh after laugh mash-up. There are a few deleted scenes, some are funny enough to be in the film. Lastly there is a hilarious gag reel, that needs to be watched numerous times to catch everything missed due to laughing.

Official Premise: When long-term congressman Cam Brady (Will Ferrell) commits a major public gaffe before an upcoming election, a pair of ultra-wealthy CEOs plot to put up a rival candidate and gain influence over their North Carolina district. Their man: naïve Marty Huggins (Zach Galifianakis), director of the local Tourism Center. At first, Marty appears to be the unlikeliest possible choice but, with the help of his new benefactors’ support, a cutthroat campaign manager and his family’s political connections, he soon becomes a contender who gives the charismatic Cam plenty to worry about. As Election Day closes in, the two are locked in a dead heat, with insults quickly escalating to injury until all they care about is burying each other, in this mud-slinging, back-stabbing, home-wrecking comedy.