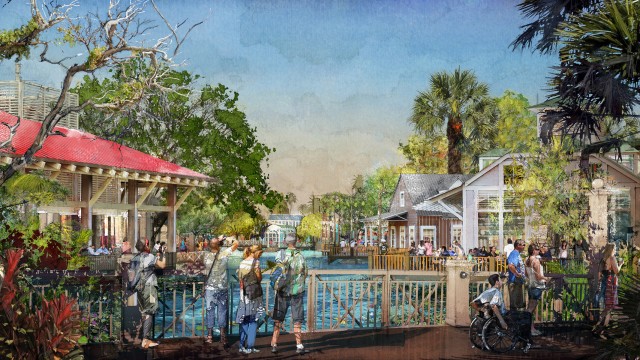 The largest expansion in Downtown Disney history, Disney Springs will provide even more opportunities for guests to relax and enjoy themselves. When completed in 2016, Disney Springs will double the shopping, dining and entertainment experiences, with an eclectic and contemporary mix from Disney and other noteworthy brands. Seen in this rendering, part of the expansion includes widening Lake Buena Vista Drive, constructing two multilevel parking garages and two pedestrian bridges and creating a new I-4 interchange that will offer guests direct access to Disney Springs. Drawing inspiration from Florida’s waterfront towns and natural beauty, Disney Springs will include four interconnected neighborhoods: The Landing (opening in early 2015), Marketplace, West Side and Town Center (opening in 2016).

LAKE BUENA VISTA, Fla. – As work continues on the re-imagining of Downtown Disney to Disney Springs, a multi-year transformation into a high-energy destination that will double the retail and offer innovative new dining options, Walt Disney World guests continue to enjoy more than 70 themed and immersive shopping, dining and entertainment venues day and night.

New this summer for Downtown Disney:

Even with expansion work underway, guests still can stroll from Downtown Disney West Side to The Marketplace. While shopping, playing and dining this summer, they will see signs of exciting things to come captured in colorful, mural-sized artistic renderings of the new Disney Springs destination throughout the expansion site.

The first phase of roadwork construction has begun, with lane closures scheduled as much as possible for off-peak hours to minimize impacts to the guest experience. Buena Vista Drive will expand from seven to 10 lanes, with a dedicated bus lane. Two parking garages and two pedestrian bridges also will be added, as well as an I-4 Interchange that will offer direct access to and from Downtown Disney/Disney Springs.

“Kung Fu: The Legend Continues” is a spin-off of the 1972–1975 TV series “Kung Fu”. It ran from 1993-1997. I remember watching “Kung Fu as a kid and loving every single minute of it. Then I started watching the spin-off and I honestly just never got into it. It picks up after “Kung Fu: The Movie” with Kwai Chang Caine (David Carradine), grandson of the legendary hero of the Wild West, who teams up with his policeman son, Peter (Chris Potter), to tame the new Wild West – 90’s urban America. I guess it plays better if you are watching this in the 90’s, even though I wasn’t even thrilled then, but this show does not hold up today. If you are a hardcore fan, you may dig it otherwise it would have been better off getting lost in the wild west.

Official Premise: When we last saw Kwai Chang Caine, in “Kung Fu: the Movie”, he was united with the son he never knew he had in turn-of-the-century Wild West. Now, the son of that son, also named Kwai Chang Caine (David Carradine), must emerge from seclusion to save the son he thought lost. Like his legendary namesake, this Caine is also a warrior monk, operating a Shaolin temple in Northern California. After an evil priest, Tan (Ernest Abuba), destroys the temple, Caine and his young son, Peter (Nathaniel Moreau) each believe the other has perished. The two embark on very different paths ­ Caine wanders the Earth, while Peter (Chris Potter) becomes a cop. When fate brings the two together, they work to overcome their differing philosophies to battle Tan, and then help the innocent and bring justice to the new Wild West ­90’s urban America.

The best part of watching this show today is no question picking out all the guest stars from back in the day including Neve Campbell, Colm Feore, Katie Griffin, James Hong, Martin Kove, George Lazenby, Mako, Barry Morse, Sandra Oh, Regis Philbin, Mickey Rooney, John Schneider, Scott Speedman, Tara Strong, George Takei and of course Richard Carradine (Note these listed are throughout the whole series not just the first season). There are no special features included on this release, like most TV DVD series releases from Warner Archive. I assume that they are going to burn through the rest of this series mostly likely before the end of the year. So if you are a fan of this show, the next three seasons should be available soon so you can get all your 90’s cheesy goodness out. 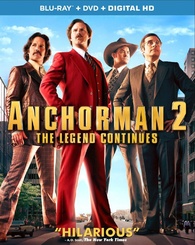 NEWS TEAM ASSEMBLE!! Ron Burgundy and his team is back. Will Ferrell, Steve Carell, Paul Rudd and David Koechner reprise their already iconic roles. “Anchorman 2: The Legend Continues” is a very ambitious sequel to the 2004 cult classic. I would say that it succeeds about 75% of the time with its jokes but does rely a lot on the shoulders of the film before it. I have a feeling that, like the first film, this is going to be one of those that gets better with age…like a good scotch as I am sure Ron Burgundy himself would enjoy.

Official Premise: After losing his job to his wife and co-anchor (Christina Applegate), Ron Burgundy (Will Ferrell) reassembles the news team (Steve Carell, Paul Rudd and David Koechner ) and squares off against a new rival (James Madsen). Will the world’s greatest anchorman be crushed beneath the weight of his own ego (and his salon-quality hair)? Anything goes in the outrageous comedy.

The three-disc Blu-ray Combo Pack includes not one…not two but three versions of the film including-in a Home Entertainment First, the Super-Sized R-Rated Version with 763 New Jokes. I think whether you loved or absolutely hated the film, this is such a crazy feat that everyone needs to check this out. Never before in the history of home entertainment has anyone replaced 763 jokes. It is like a new movie told within the shell of the first. Paramount also squeezed in a DVD copy of the film along with an HD Digital Ultraviolet copy.

Paramount not only delivered an astounding three version of the film, they also included over four hours of special features. The first disc including a perfect and highly recommend commentary track from the whole gang including Adam McKay, Judd Apatow, Will Ferrell, Steve Carell, Paul Rudd & David Koechner. Honestly, it is like you are watching a fourth version of the film with even more new jokes. If you are looking for replay value on this film if you get bored with the other three, this is a great way to re-enjoy the film.

There is a Behind-the-Scenes look with “Newsroom”, which takes us inside the making of the film. There is a two part Gag Reel including, because one is just not enough. “Line-O-Rama, Parts 1 & 2” is another collection of non-stop alternate lines from the film. “Welcome to the Dolphin Show” has Ron Burgundy taking on the crowd at SeaWorld. “Catfight” features more ad-lib between Christina Applegate and Meagan Good going head-to-head. “News-O-Rama” features Ron and the News Team bringing you the headlines. “Kench-O-Rama” is a mashup of Kench Allenby’s most Australian moments…Brilliant! Lastly there is a Cast Table Read, which is also a riot.

The second Blu-ray disc includes the Super-Sized R-Rated Version along with more special features. There is an Behind-the-Scenes featurette. “Anchorman 2: The Musical” is a look into how this film almost was a musical sequel. “RV” dives into the work behind the RV tumble. “Baxter & Doby” focuses on the animals of Anchorman 2. “News Fight” was one of the best parts of the film and this dives into the biggest, baddest all-star celebrity brawl ever! There are an additional 90 minutes of Deleted, Extended & Alternate Scenes. At this point I said out loud, “SERIOUSLY?” How did they have this much footage.

“Previsualizations” looks into the various FX filled scenes including the RV, Shark Attack and the News Fight sequences. “Auditions” includes pre-film scenes featuring Meagan Good, Dylan Baker and Amy Poehler. “Benefit for 826LA” is a special tribute to Anchorman 2. Lastly there are trailers. The last disc, which is the DVD, only includes the theatrical version of the film. Also be sure to check out the pamphlet inside the case which comes with a digital code to unlock all levels for “Scotchy Scotch Toss” video game. 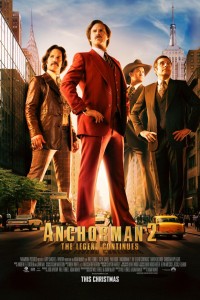 I don’t know how to put this, but…Ron Burgandy is still kind of a big deal. And as portrayed by Will Ferrell he brings a hilarious dose of good news with him in the new film, “Anchorman 2: The Legend Continues.”

When we last left Ron (Ferrell) and his news team, he had just regained his job back and was happily co-hosting the San Diego evening news with his beloved Veronica (Applegate). As we meet him again, he has just been fired, replaced by Veronica and reduced to hosting the hourly dolphin show at Sea World. After a disastrous interaction with the crowd (“children and women hate you, Ron” a young boy calls out), Burgundy finds himself, literally at the end of his rope. However he is saved by a visit from a representative of an all new, 24 hour news station, hilariously played by the usually very serious Dylan Baker. Offered an anchor position, Ron accepts with the condition he can assemble his old news team. Sportscaster Champ Kind (David Koechner) now operates a fried “chicken” restaurant. Feature reporter Brian Fantana (Paul Rudd) has made a successful living by photographing kittens. And weatherman Brick Tamblin (Steve Carell) is dead. At least he thinks he is. The newly reunited team head for the Big Apple and new found fame!

I had one fear when I sat down to watch this movie: that I had seen so much of it already in the incessant promotional on-slaught that has been running since Labor Day that I’d already seen the funny stuff. Not to worry. In the capable hands of writers Ferrell and McKay, Ron Burgundy’s world has more than enough room for laughs. Originally scheduled to helm the 2 a.m. news shift, Burgundy finds success by, in his words, “telling the people not what they NEED to hear but what they WANT to hear. Couple this idea with Ron bottle feeding a shark and experiencing interracial dating and you have the makings of one outrageously funny film. All of the returning actors are funny and strong, with Rudd’s Brian Fantana a standout. New guest stars, including Kristen Wiig, James Marsden and Harrison Ford shine just as bright as the story’s regular cast members. Add to these stars a strong performance by Dobby the Shark and you’ve got yourself one damn funny movie!