The horror genre is easily my favorite out of all types of movies. When I first saw Adam Green’s “Hatchet”, I was blown away.  The film was so gory, in-your-face and did not apologize at all, I loved it. When I saw the sequel, the gore was there but the film itself was not as great. So I was hesitant going into this latest chapter of swamp monster Victor Crowley, but it was totally kick-ass. This was not directed by Adam Green, though he did write the screenplay. It marked the directorial debut of acclaimed cameraman BJ McDonnell, check out our interview with him here. If you weren’t a fan of “Hatchet II”, I recommend you still give this a chance.  They really took the good and the bad of the last film and improved on it. You get a fast, fun and did I mention gory crazy ride here!  Recommended for any true horrorhound! Just be warned it is not for the queasy!

The film packs an amazing genre cast including Danielle Harris and Kane Hodder returning to their roles. Kane Hodder actually gives his best performance Victor Crowley performance to date, he really put a lot into him this time. Also starring are favorites Zach Galligan (“Gremlins”), Caroline Williams (“Texas Chainsaw Massacre 2”), and Derek Mears (“Friday the 13th”, “Predators”). That’s right, be sure to expect an epic Jason vs Jason stand-up with Mears and Hodder.  It is a fanboys dream and it is very sweet. I think that why this film succeeded is that director BJ and his team are really just fans of classics 80’s horror and they made a film that they would want to watch. I hope that this doesn’t conclude the series of “Hatchet” because I would love to see more.

Official Premise: Concluding the saga begun in Adam Green’s hit 2006 thriller, HATCHET III follows the vengeful Marybeth (Halloween’s Danielle Harris) as she continues seeking out a way to destroy Victor Crowley (Kane Hodder, Friday the 13th), a hulking, seemingly-invincible sociopath rampaging through a sleepy Louisiana swamp. While a heavily-armed team of mercenaries takes to the bayou surrounding Crowley’s home, Marybeth finds herself begrudgingly teaming up with a local policeman (Gremlins star Zach Galligan) and his ex-wife (Caroline Williams, Texas Chainsaw Massacre 2) – an expert on the maniac who may have uncovered the secret to ending his murderous rampage once and for all.

Dark Sky Films released this unrated director’s cut of “Hatchet III”.  The Blu-ray presentation is very impressive for the low-budget horror title.  The 1080p transfer is crisp and really work even in the extremely dark setting the film takes place in.  The gore is well represented, in fact this film actually made me look away at point and that is a first in a while.  The DTS-HD Master Audio 5.1 track works with the action scenes, including every chainsaw, bone breaking effects etc. The special features are impressive like the film itself.  There are two commentary tracks, the first is with Writer/Producer Adam Green, Director BJ McDonnell, Cinematographer Will Barratta, and Make-Up Effects Artist Robert Pendergraft.  It is a blast to listen to and definitely a must for fans of the film. There is also a cast commentary track again with Adam Green, BJ McDonnell and adding in Kane Hodder this time. Next up there are three featurettes covering everything in the production including, “Hatchet III: Behind The Scenes”, “Raising Kane” and “Swamp Fun”. 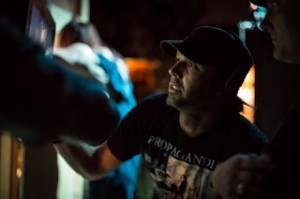 BJ McDonnell made his directorial debut on the kick-ass horror film “Hatchet III”. He is no stranger to films though having worked as camera operator on over 100 films including “Star Trek Into Darkness”, “Abraham Lincoln: Vampire Hunter”, “Battle Los Angeles” and Rob Zombie’s “Halloween”. Media Mikes had a chance to chat with BJ about stepping into the director’s chair and taking over this fun horror franchise.

MG: What was your biggest challenge stepping into this role?
BJ: Being on the set is very comfortable for me now. I am used to working with actors and the crew since I am in that environment all the time. My issue was separating myself to focus on setting up the shots and making sure that I was getting the right performance from the actors. The post-production stuff was very tough. Our editor, Ed Marx, was awesome though. He is great. But the whole thing was a long process.

MG: What do you think makes the “Hatchet” franchise so unique?
BJ: These films are made just to be fun. These are meant to scary people or make them feel queasy with the gore and violence or just have fun. It is a real testament to the horror films of the 80’s. It is a fun sit back and watch a monster tear people up into shreds. They are also just fun movies to make. It is like a rollercoaster ride…

MG: I agree! From the moment that shotgun goes off…BANG!
BJ: That is one of the things I wanted to do. I wanted to make sure that this film flowed fast and that no one got bored throughout certain parts. I wanted to make it a good fast paced ride that would keep your interest that whole time. I think we accomplished that.

MG: Do you feel you had a grip of the franchise having worked on “Hatchet I & II”?
BJ: You look and see what happened with the other ones. There is advantages and disadvantages. You get to see what people’s comments are from the first two films and improve on that. A lot of the comments, I actually agree with. One was that “Hatchet II” didn’t get going till about 45 minutes in and I agree. So I wanted to make sure that didn’t happen with this one. There is the disadvantage with people that don’t like the “Hatchet” films to begin with. You got to take the good with the bad and say “Hey I made a fun movie, I hope you enjoy it”.

MG: The gore is super graphic and even goes beyond the second film; tell us about amping that up this time?
BJ: We all came up with the kills together – myself, Adam and Robert Pendergraft. We each had our own ideas what we wanted to do and we collaborated the whole time while the script was being done. I wanted to make it as gory as I could, which is tough to do when you do not have that big of a budget. That is also why some of the kills are so fast since they didn’t work as well as they should have and there are quick cuts. All in all it works out in the end and I think it still came out cool.

MG: What was it like working with all the great genre talent?
BJ: We had Kane and Danielle already on board. I worked with Kane going back to “The Devil Rejects” years ago. He is a great bud of mine. I worked with Danielle going back to Rob Zombie’s “Halloween”, so I knew her from that. It is good because everyone was family like. Derek Mears, I knew him “MacGruber”. He is just a great guy and true friend. Never worked with Zach Galligan before but he was a choice of mine to cast because I love “Gremlins”. He brought a lot to the table and had tons of great ideas. I hope to work with him again. I can go on and on, I just love this cast! It was like working with friends.

MG: I loved the Mears/Hodder face off.
BJ: That was planned on purpose, obviously. I think it was actually supposed to happen in the second film but Mears was working on “Predators”, I believe. We always wanted to do it and put Jason vs. Jason up against each other since it has never been done. Those guys are friends and they loved doing it, so it was just the right time.

MG: What do you love most about the horror films?
BJ: The thing about horror that I like is that you don’t have to play by all the rules. In horror you can do whatever you want. Like with Victor Crowley, he is a ghost so you can do whatever you want. So since he is a repeater, he will come back again and again. Plus with horror you have a fan base that is like no other. You do not find that with other genres. There isn’t a romantic comedy fan base. Horror fans are really great.

MG: Now that you got your feet wet directing, what is next?
BJ: There are two scripts being written right now that I will be working on. One is a 90’s action film, written by Jason Trost, who is a good buddy of mine and also in “Hatchet III”. The other is spy movie with a psychological twist. I am trying to go with something that is more action based for a second film and then probably going back to horror.