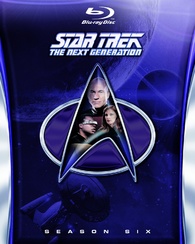 The sixth season of “Star Trek: The Next Generation” is easily one of my favorites. Each of the show’s characters have been developed so well by this point. This show was also airing the same time as “Deep Space Nine” but this season was still one of the most strongest of the series. Patrick Stewart really delivered some of his best performances with the following episodes “Chain of Command, Parts 1 and 2”. Also season six includes several well-known recurring characters, most importantly being Montgomery Scott, the Enterprise engineer from the Original Series, who is found alive and adjusting to the twenty-fourth century. This is also the second to last of the seasons, which means that most likely later this year this “Star Trek: The Next Generation” will be available complete on Blu-ray.

Here is the episode list for this season: Time’s Arrow, Part II; Realm of Fear; Man of the People; Relics; Schisms; True-Q; Rascals; A Fistful of Datas; The Quality of Life; Chain of Command, Part I; Chain of Command, Part II; Ship in a Bottle; Aquiel; Face of the Enemy; Tapestry; Birthright, Part I; Birthright, Part II; Starship Mine; Lessons; The Chase; Frame of Mind; Suspicions; Rightful Heir; Second Chances; Timescape and Descent, Part I. Brent Spiner’s dual performance as Data and his father Dr. Noonien Soong in “Birthright” are fantastic. Of course like I said above, the two part episode “Chain of Command” is literally one of the best arcs. Also Riker (Jonathan Frakes) copes with a bizarre identity crisis that pits him against himself in “Second Chances”.

Like the five seasons before this one, Paramount has consistently delivered this series with amazing releases. These episodes are newly remastered within their 1080p transfers.  The visual effects look better and overall the show just feels much sharper.  Since this show was shot on video and the special effects were set in their masters. They really went to town and delivered an impressive release yet again. Same goes for the DTS-HD Master Audio 7.1 surround track, which is a such a treat for this series. I literally just got a new 7.1 surround sound system and I couldn’t help but turn it up to 11.

There are brand new deleted scenes on the following episodes Time’s Arrow, Part II, Relics, True Q, Ship in a Bottle, Face of the Enemy, Tapestry, Birthright, Part II, The Chase and Rightful Heir. The real star of this release is easily the brand new, three-part documentary “Beyond the Five Year Mission – The Evolution of Star Trek: The Next Generation” featuring fascinating interviews with cast and crew. Lastly there are episodic promos on each on the six discs and a new gag reel included.