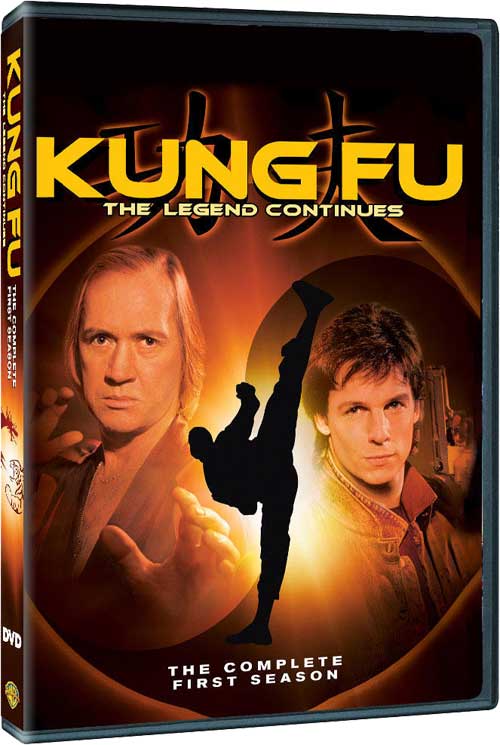 “Kung Fu: The Legend Continues” is a spin-off of the 1972–1975 TV series “Kung Fu”. It ran from 1993-1997. I remember watching “Kung Fu as a kid and loving every single minute of it. Then I started watching the spin-off and I honestly just never got into it. It picks up after “Kung Fu: The Movie” with Kwai Chang Caine (David Carradine), grandson of the legendary hero of the Wild West, who teams up with his policeman son, Peter (Chris Potter), to tame the new Wild West – 90’s urban America. I guess it plays better if you are watching this in the 90’s, even though I wasn’t even thrilled then, but this show does not hold up today. If you are a hardcore fan, you may dig it otherwise it would have been better off getting lost in the wild west.

Official Premise: When we last saw Kwai Chang Caine, in “Kung Fu: the Movie”, he was united with the son he never knew he had in turn-of-the-century Wild West. Now, the son of that son, also named Kwai Chang Caine (David Carradine), must emerge from seclusion to save the son he thought lost. Like his legendary namesake, this Caine is also a warrior monk, operating a Shaolin temple in Northern California. After an evil priest, Tan (Ernest Abuba), destroys the temple, Caine and his young son, Peter (Nathaniel Moreau) each believe the other has perished. The two embark on very different paths ­ Caine wanders the Earth, while Peter (Chris Potter) becomes a cop. When fate brings the two together, they work to overcome their differing philosophies to battle Tan, and then help the innocent and bring justice to the new Wild West ­90’s urban America.

The best part of watching this show today is no question picking out all the guest stars from back in the day including Neve Campbell, Colm Feore, Katie Griffin, James Hong, Martin Kove, George Lazenby, Mako, Barry Morse, Sandra Oh, Regis Philbin, Mickey Rooney, John Schneider, Scott Speedman, Tara Strong, George Takei and of course Richard Carradine (Note these listed are throughout the whole series not just the first season). There are no special features included on this release, like most TV DVD series releases from Warner Archive. I assume that they are going to burn through the rest of this series mostly likely before the end of the year. So if you are a fan of this show, the next three seasons should be available soon so you can get all your 90’s cheesy goodness out.