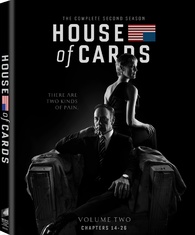 When I watched the first season of “House of Cards“, I thought what could be better than this season? Well that answer is easy because it is the second season. It is rare that a show not only stayed in line with the previous season but also surpasses it. The acting in this series just keeps blowing me away as well. Kevin Spacey really gets comfortable in the shoes of Frank Underwood and Robin Wright just stunning, not to mention the rest of this stellar cast. I dare you to watch one episode of this series and see if you don’t end up binging on it for the rest of the night. If you dig shows about the seedy world of politics, look no further because it doesn’t get any better than this…(I hope I can negate that statement when season three hits).

Official Premise: Masterful, beguiling and charismatic, Francis Underwood (Kevin Spacey) and his equally ambitious wife Claire (Robin Wright) continue their ruthless rise to power in Season 2 of ‘. Behind the curtain of power, sex, ambition, love, greed and corruption in modern Washington D.C. the Underwoods must battle threats past and present to avoid losing everything. As new alliances form and old ones succumb to deception and betrayal, they will stop at nothing to ensure their ascendancy.

Sony released The Complete Second Season of “House of Cards” on Blu-ray accompanied by a Ultraviolet Digital Copy. The 1080p  presentation of the episodes is near flawless. The DTS-HD Master Audio 5.1 surround track worked perfectly so I can lean on every word spoken. The special features are another win for this release. “Two Houses” looks into at the original show and how this series came together. “Table Read” is a behind-the-scenes look cut with with the scenes from the show. “Direct Address” features how Francis Underwood speaks directly to viewers in both the original BBC series and this new adaptation. “Politics for Politics Sake” takes at looks into the politics themes in the show.  Lastly, “Line of Succession” looks into what goes into making an episode.