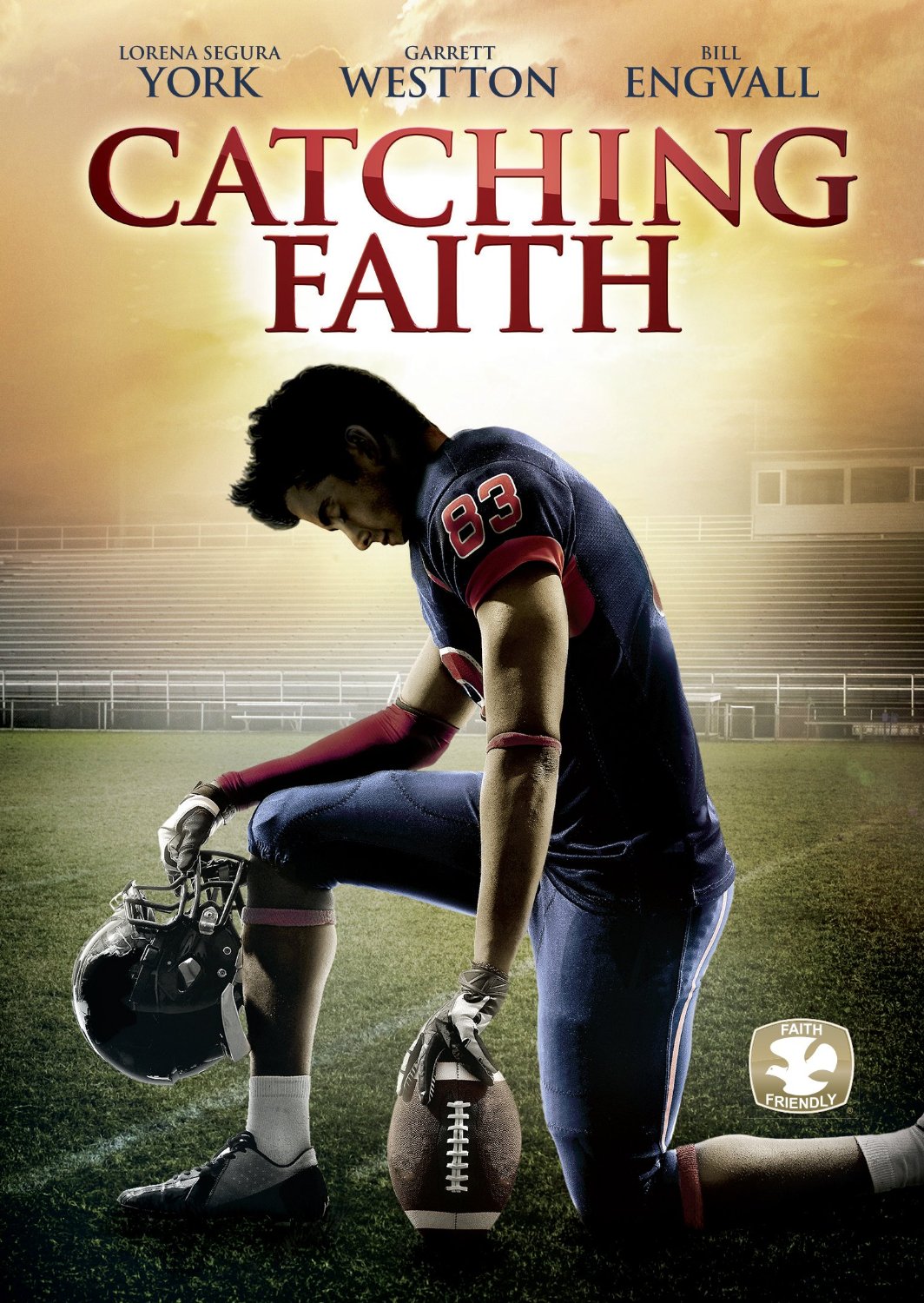 Media Mikes has teamed up with RLJ Entertainment to give two of our readers a chance to win a DVD copy of their upcoming release “Catching Faith,” a moving story about a woman who seems to have it all; a perfect marriage, a daughter at the top of her class, and an athletic son at the top of his game. But things are not always as they appear.

All you have to do is register below and let us know what you’re favorite “faith-based” film is. Do you enjoy “Grace Unplugged?” How about “Soul Surfer?” Just let us know below. Two random entries will be chosen and they will receive a DVD copy of “Catching Faith.”

This contest runs until Sunday, August 16th. Winners will be notified via email. “Catching Faith” will be released nationally on Tuesday, August 18th, 2015. Good luck!

Synopsis: John and Alexa Taylor appear to have the perfect life – they’re the envy of all the parents in town. Their son Beau is the high school football star and their daughter Ravyn is a straight-A student. But when Beau is caught drinking alcohol, his place on the team and his bright future are on the line. With the football season at stake and the judgmental community turning their backs on them, every member of the Taylor family is at a crossroads. Now, they must find the strength from one another, and the spiritual courage from within, to prove that faith and family is the only score that really matters. 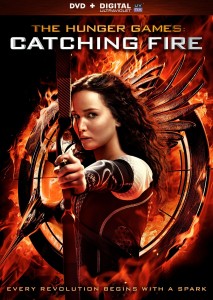 When I saw “The Hunger Games”, I plain out hated it. No, I have never read the books and have no interest in doing so either. I thought the movie was completely bland and watered down of what it could have been. It was also during a time when I was not a huge fan of Jennifer Lawrence. Well, thanks to “Silver Linings Playbook” and “American Hustle” that has changed and I have actually become a huge fan of Lawrence now. Unfortunately it only pains me more to say that this sequel could actually be worse the first film. Firstly, it is WAY too late at nearly two and half hours. Nothing happens for the first hour and then is so anti-climatic throughout the rest of the film that the cliffhanger ending just makes you slap your head in disgust.

Official Premise: Based on the best-selling second novel of Suzanne Collins’ award-winning trilogy, with a screenplay by Simon Beaufoy and Michael DeBruyn and directed by Francis Lawrence (I Am Legend), The Hunger Games: Catching Fire begins as, against all odds, Katniss and her fellow tribute Peeta have returned home after surviving The Hunger Games. Winning means they must turn around, leaving their loved ones behind and embark on a “Victory Tour” through the districts. Along the way, Katniss senses a rebellion simmering – one that she and Peeta may have sparked. At the end of the Victory Tour, President Snow announces a deadly 75th Hunger Games that could change Panem forever.

Since this film was in such high demand (no idea why), we only were able to snag this on DVD. The DVD also comes with an HD Digital Ultraviolet copy. In terms of special features, the DVD once again gets the short end of the stick. There is an audio commentary track from director Francis Lawrence (not relation to Jennifer) and producer Nina Jacobson. No cast involved at all which is a shame since it could have added some life to this track. The only other real special feature are a few deleted scenes. Then there is a sneak peak of “Divergent”, which looks even worse than this film if that is possible. The Blu-ray release comes with a nine-part feature-length documentary called “Surviving the Game: Making Catching Fire”, so fans of the film should be sure not to miss that. I am sure I will still see “Mockingjay: Part 1 & 2” but I really hope they are a vast improvement on these first two.

I’m guilty of not being wowed by the first Hunger Games movie. I agreed with those who called it a repackaged “Battle Royale” for American teens. Regardless of my criticism I saw some potential. The potential wasn’t wasted, but was instead misguided and stumbled around until the characters entered the arena. Gary Ross, the man who brought “Dave” and “Lassie” to audiences during the 90’s, was not the right choice to direct the first chapter of the adolescent, bloodbath trilogy. Luckily for people like me and fans of books, the studio has found the right man for the job.

Some time has passed since the 74th annual Hunger Games and things have yet to improve in the life of our heroine, Katniss Everdeen (Lawrence). She’s continuing her tricky love triangle with fellow victor Peeta Mellark (Hutcherson) and hometown lover Gale (Hemsworth). She also suffers from memories of last years games while her mentor, Haymitch (Woody Harrelson), continues to sulk behind a bottle of booze. President Snow (Donald Sutherland) is still trying to weather the storm and keep Katniss in line by threatening her family and friends.

His plan is to have the two “lovers” embark on a victory tour to each district in the hopes of extinguishing any hopes of rebellion. The Capitol hands Katniss and Peeta some scripted speeches and touts them as the happy couple. With the threat of harm to their families, Katniss and Peeta know they have to play along, but once they start speaking from the heart, the somber crowds begin to show glimmers of hope and disobedience to the Capitol. So what is a President a to do? To declare that the 75th annual Hunger Games will draw from previous winners each in district. God bless those loopholes.

Sure we’re about to start treading the same ground and you can’t help but feel you’re watching a rehashing of the first movie, but “Catching Fire” has taken huge strides in every category. Director Francis Lawrence has delivered us a far more superior sequel that will leave you wanting more. His pacing and direction make every minute of this movie tense and each scene has sense of purpose towards the final moments. Even though were once again thrown into the gauntlet, poisonous fog and skilled killers pump up the action this time around.

The director is obviously the biggest change for this movie, but let’s just go ahead and admit that the foundation and glue of this movie is Jennifer Lawrence. Without her, Katniss wouldn’t appear to be so strong, but feel so fragile. The supporting actors like Phillip Seymour Hoffman, Jena Malone and Lenny Kravitz are a fine addition, but they wouldn’t have as much purpose without the commanding presence of Lawrence. Her acting doesn’t smother any scene, but instead leads the way for others.

This time around we’re not presented with a couple of terribly presented moral questions, but instead the movie holds up a mirror to society. The very people who create the political ripples and waves are instead masqueraded as media darlings in the hopes of discarding their true meaning. The men behind the curtains hope to keep the ignorant, ignorant by presenting and talking to our heroes like they’re TMZ celebrities. And of course we have the typical bloodlust of the general populous. This dystopian world doesn’t seem so far, far away. “Catching Fire” is a thrilling movie that increases the stakes and expectations for “Mockingjay”. Let’s hope Francis Lawrence can keep distancing himself from the child’s play of the first movie and really deliver the exciting conclusion, “Catching Fire”, has set-up.

THE HUNGER GAMES: CATCHING FIRE begins as Katniss Everdeen has returned home safe after winning the 74th Annual Hunger Games along with fellow tribute Peeta Mellark. Winning means that they must turn around and leave their family and close friends, embarking on a “Victor’s Tour” of the districts. Along the way Katniss senses that a rebellion is simmering, but the Capitol is still very much in control as President Snow prepares the 75th Annual Hunger Games (The Quarter Quell) – a competition that could change Panem forever.

If you would like to enter for passes to the following advance screening:

Passes are VERY limited and are available on a first-come, first-served basis.

THE HUNGER GAMES: CATCHING FIRE is directed by Francis Lawrence, from a screenplay by Simon Beaufoy and Michael DeBruyn, based upon the novel “Catching Fire” by Suzanne Collins and produced by Nina Jacobson and Jon Kilik. The novel is the second in a trilogy that has over 50 million copies in print in the U.S. alone. THE HUNGER GAMES: CATCHING FIRE opens on November 22, 2013. Lionsgate presents a Color Force/Lionsgate production.

Santa Monica, CA, August 08, 2011– LIONSGATE® (NYSE: LGF), a leading global entertainment company, announced today that it will release CATCHING FIRE, the film adaptation of the second book in Suzanne Collins’ runaway bestselling HUNGER GAMES trilogy, on November 22, 2013. The announcement was made by Joe Drake, co-COO of Lionsgate and President of its Motion Picture Group. No further details about CATCHING FIRE have been confirmed at this stage.

Said Drake of the date, “The magical thing about the Hunger Games trilogy is that the books have such a vastly broad appeal. The stories truly offer something for everyone, and the period around the Thanksgiving weekend is such an opportunity for families and friends to make an event of going to the movies.”

THE HUNGER GAMES is currently in production and will be released on March 23, 2012. THE HUNGER GAMES is directed by Gary Ross, and produced by Nina Jacobson’s Color Force in tandem with producer Jon Kilik. Alli Shearmur, President of Development and Production at Lionsgate, is overseeing the production on behalf of the studio. Suzanne Collins’ best-selling novel, which has over 3 million copies in print in the United States alone, is the first in a trilogy of novels which have developed a global following.