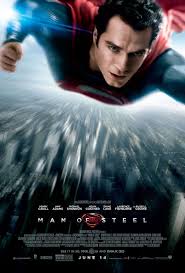 Let me get it out in the open. Just like to some fans Sean Connery will always be James Bond to me the late Christopher Reeve will always be Superman. I’ll also admit that I teared up the first time I saw Brandon Routh sporting the cape. That being said I was more than ready to see Henry Cavill take his turn as the Man of Steel. And he doesn’t disappoint.

In the tradition of many recent “new origin” films, “Man of Steel” takes the familiar tale of the last son of Krypton and turns it into an exciting film that, like many of this summer’s movie fare, goes on way too long.

The story begins on the planet Krypton. For centuries the new-born of the planet have been genetically created, with each baby predetermined as to what their career will be (scientist, soldier). Jor-El (Russell Crowe) and his wife, Lara (Ayelet Zurer) have decided to forego science and have just had a naturally conceived baby, who they name Kal-El. Due to the constant mining of the planet’s core, Jor-El continually tries to convince the planets ruling body that the planet will soon be no more. He is rebuffed by the powers that be. As he continues to press his case, Jor-El is interrupted by a visit from General Zod (Shannon, in full Bruce Dern/Christopher Walken mode). Zod is attempting a military coup, which fails. He and his followers are sentenced to 300 cycles in the Phantom Zone. As their punishment is being meted out the planet begins to implode. Despite Lara’s reservations (“he will be a freak”), Jor-El (“he will be a God”) puts his son in a rocket and sends him to the only planet with a yellow star. Earth.

Give credit to Zack Snyder. He willingly took on one of the most iconic characters in popular fiction and added his own touches. Fans will have to forget “Smallville” or the old “Superboy” comics. Here young Clark Kent is pretty much forbidden to use his powers. His adoptive parents, Jonathan and Martha Kent (Kevin Costner and Diane Lane) have raised him to never reveal what he can do for fear he will be taken away from then. And those powers are sometimes overwhelming. When you have super-hearing you basically hear EVERYTHING that’s happening around you. Clark learns to focus, but it isn’t easy. It also isn’t easy NOT using his powers. Seems like every time Clark turns around someone needs rescuing! After high school he becomes a nomad, wandering the continent and taking odd jobs. However, just like in his hometown of Smallville, Kansas, people need help, meaning that Clark is constantly on the move. A chance meeting with reporter Lois Lane, who is investigating a government project, sets him on the path of action and discovery.

Though the film is packed with action, almost to its detriment, it is the characters that make it interesting. Cavill is solid as Clark/Kal-El (he is only referred to once, in passing, as Superman). It took a brave actor to step into those boots and he acquits himself well. Adams makes Lois a woman of the 21st Century. She’s not smitten by Clark at first…she’s not doomed to be a damsel in distress, which makes her more interesting. Shannon is just plain evil, even outdoing Kevin Spacey’s Lex Luthor in “Superman Returns.” (speaking of Lex Luthor, keep an eye out for a couple of tanker trucks brightly painted LEX CORP). Like Robert Shaw in “From Russia With Love,” Shannon comes across as a villain who can actually kick the Man of Steel’s butt! The supporting cast does just as well, including Laurence Fishburne as Daily Planet Editor Perry White and Christopher Meloni as a high ranking Air Force officer. Last but not least, Clark’s two dads. Both Crowe and Costner add real emotion to their characters and, with this role and his work in “The Company Men,” Costner continues to make the transition from star to first rate character actor.

The visual effects are strong, with not a budgetary dollar left unspent. As I noted above, the film IS exciting, but there’s just SO MUCH going on that sometimes you lose track. After the third eight-minute sequence (yes I timed it) of Clark and General Zod throwing each other around you might think you stumbled into “Superman II.” The script and story are clever at times. When asked if he means any harm to America he reminds the interrogator that he was raised in Kansas, which made the Kansas-fied audience at the screening cheer. And this is obviously a fantasy film because when Clark tunes in the University of Kansas football game on television KU is winning!

Still, all in all, if you’re having reservations about seeing “Man of Steel” I urge you to put them away. How can you not like a man from Kansas?