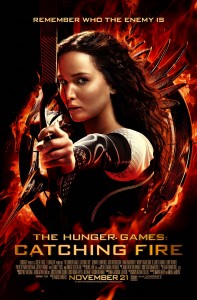 I’m guilty of not being wowed by the first Hunger Games movie. I agreed with those who called it a repackaged “Battle Royale” for American teens. Regardless of my criticism I saw some potential. The potential wasn’t wasted, but was instead misguided and stumbled around until the characters entered the arena. Gary Ross, the man who brought “Dave” and “Lassie” to audiences during the 90’s, was not the right choice to direct the first chapter of the adolescent, bloodbath trilogy. Luckily for people like me and fans of books, the studio has found the right man for the job.

Some time has passed since the 74th annual Hunger Games and things have yet to improve in the life of our heroine, Katniss Everdeen (Lawrence). She’s continuing her tricky love triangle with fellow victor Peeta Mellark (Hutcherson) and hometown lover Gale (Hemsworth). She also suffers from memories of last years games while her mentor, Haymitch (Woody Harrelson), continues to sulk behind a bottle of booze. President Snow (Donald Sutherland) is still trying to weather the storm and keep Katniss in line by threatening her family and friends.

His plan is to have the two “lovers” embark on a victory tour to each district in the hopes of extinguishing any hopes of rebellion. The Capitol hands Katniss and Peeta some scripted speeches and touts them as the happy couple. With the threat of harm to their families, Katniss and Peeta know they have to play along, but once they start speaking from the heart, the somber crowds begin to show glimmers of hope and disobedience to the Capitol. So what is a President a to do? To declare that the 75th annual Hunger Games will draw from previous winners each in district. God bless those loopholes.

Sure we’re about to start treading the same ground and you can’t help but feel you’re watching a rehashing of the first movie, but “Catching Fire” has taken huge strides in every category. Director Francis Lawrence has delivered us a far more superior sequel that will leave you wanting more. His pacing and direction make every minute of this movie tense and each scene has sense of purpose towards the final moments. Even though were once again thrown into the gauntlet, poisonous fog and skilled killers pump up the action this time around.

The director is obviously the biggest change for this movie, but let’s just go ahead and admit that the foundation and glue of this movie is Jennifer Lawrence. Without her, Katniss wouldn’t appear to be so strong, but feel so fragile. The supporting actors like Phillip Seymour Hoffman, Jena Malone and Lenny Kravitz are a fine addition, but they wouldn’t have as much purpose without the commanding presence of Lawrence. Her acting doesn’t smother any scene, but instead leads the way for others.

This time around we’re not presented with a couple of terribly presented moral questions, but instead the movie holds up a mirror to society. The very people who create the political ripples and waves are instead masqueraded as media darlings in the hopes of discarding their true meaning. The men behind the curtains hope to keep the ignorant, ignorant by presenting and talking to our heroes like they’re TMZ celebrities. And of course we have the typical bloodlust of the general populous. This dystopian world doesn’t seem so far, far away. “Catching Fire” is a thrilling movie that increases the stakes and expectations for “Mockingjay”. Let’s hope Francis Lawrence can keep distancing himself from the child’s play of the first movie and really deliver the exciting conclusion, “Catching Fire”, has set-up.