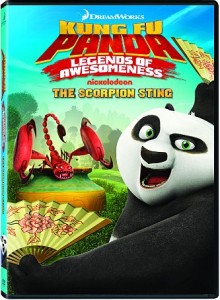 There is something about “Kung Fu Panda” that you can’t help be love. I am a huge fan of the two movies and I have been loving the TV series as well “Kung Fu Panda: Legends of Awesomeness”. “The Scorpion Sting” is the latest DVD collection of episodes from this series and it is jam-packed with action, comedy and a whole lotta Po, who is everyone favorite Panda. If you love “Kung Fu Panda”, then you are going to love this show for sure! Even my 16 month old daughter loves this show and walks around with her plush doll screaming “Po”, so I think they are on to something here!

Get ready for more high-kicking action and fur-flying fun in this awesome animated TV series based on the Academy Award-Nominated hit movie Kung Fu Panda*! He may not be your typical warrior, but Po packs an arsenal of martial arts skills as big as his heart…and his stomach. Always ready to fight for what’s right, Po and the Furious Five—Tigress, Monkey, Mantis, Crane and Viper—face exotic dangers at every turn, including a pair of magic shoes with an evil “sole,” and Scorpion, one of the sharpest villains in all the land!

This DVD contains over two hours of episodes including the following: “Scorpion’s Sting”, “Crane On A Wire”, “Love Stings”, “Kung Shoes”, “Owl Be Back”, “Qilin Time”, “Monkey in the Middle”. I also recently received a DVD volume for the show “Monsters vs. Aliens” and that also included a Digital copy download for each of the episode, I am surprised that this one did not since it would be a great added feature for sure. Also included though as a bonus is the “Kung Fu Panda: Scorpion Maze” App, which is available for download on iOS and Android devices. It is a fast-paced and addictive arcade-style game and ton of fun. If you enjoyed DVD, this you will be excited to find that that in Spring 2014 the next DVD is being released called, “The Midnight Stranger”. Keep ’em coming! 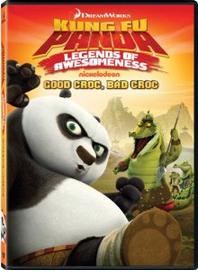 “Kung Fu Panda: Legends of Awesomeness” is a spin-off animated series in the “Kung Fu Panda” franchise and takes place between the two films. Mike Wingert has done a great job stealing Jack Black’s voice to give life to Po. Lucy Lu and James Hong are the only cast returning from the series. I have to admit since this series started airing in 2011, I am surprised that it took so long to start releasing these episodes on DVD. This show would have benefited so much more from a Blu-ray transfer with its great animation and colorful episodes. This show doesn’t have the same charm of the films but it is still action-packed, funny and clever. So kids (and most adults) should have a blast with these episodes.

Official Premise: Brace yourself for awesome action and legendary laughs in this fun-filled animated TV series based on the Academy Awardr-Nominated hit movie Kung Fu Panda! As the chosen Dragon Warrior and sworn protector of the Valley of Peace, Po the panda is highly skilled, ever vigilant and hungry for justice…and dumplings. Together with the Furious Five – Tigress, Monkey, Mantis, Crane and Viper – Po must fend off fierce villains, including an evil version of himself (courtesy of the Mystical Mirror of Yin and Yang) and the toothy Croc Bandits!

There are seven episodes included out of over fifty episodes that has aired to date, but that still adds to nearly three hours of kung-fu action packed adventures.  The episodes included are “Good Croc, Bad Croc”, episodes 6; “The Princess and the Po”, episode 2; “Chain Reaction. episode 4; “Bad Po”, episode 10; “Jailhouse Panda”, episode 8; “Father Crime”, episode 25; “Po Fans Out”, episode 18. This is a nice sample of the show’s first season but I still would rather get a complete season one DVD release. There are no additional special features included amongst these episodes. Though, in the case there is a code included to unlock power-ups, exclusive downloads and more on the all-new online game “Croc Crackdown” on Nick’s website. If you want more you will happy to know that the included pamphlet advertises “The Scorpion Sting”  DVD release and more are coming soon.