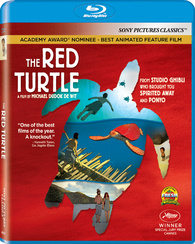 I am a huge fan of Studio Ghibli, “The Red Turtle” marks a change for the company. This is not an original film from them but instead a French film acquisition. It is also a wordless film yet also a beautiful film. Put it this way, I watched this film with my 5 year old and she was interested the whole time, even without words. The story was beautiful and the animation was gorgeous. Not your typical Ghibli film but definitely a different one and quite enjoyable.

Official Premise: Marking the much-anticipated return of Studio Ghibli, this masterfully animated fantasy film tells the story of a man shipwrecked at sea who becomes stranded on a beautiful but desolate island. He learns to live in isolation, seemingly tormented in his efforts to escape the island by a giant red turtle. Miraculously, he soon comes upon a young woman also lost at sea and they create a family together.

The 1080p transfer looks solid. The animation is well represented here and the colors are vibrant. The DTS-HD Master Audio 5.1 works perfectly with the films score and sound effects, which gracefully drive the film along. The special features are a little light. There are two featurettes going behind-the-scenes including “The Birth of The Red Turtle” and “The Secrets of The Red Turtle” as well as a AFI Fest Q&A with Director Michael Dudok de Wit. This is a solid interview with a lot of great details though.