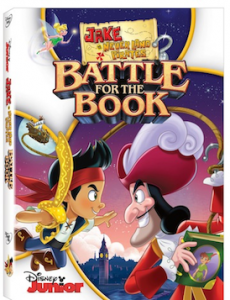 Disney Junior’s “Jake and the Never Land Pirates” continues to impress time after time. The show is great and then a few years ago, they introduced Peter Pan into the mix, which made it cooler. Now they have mixed in classic characters like Wendy, Michael and John to complete circle in the all-new special “Battle for the Book!”. This is literally the best episode of the series since it has aired. It is funny, sharp and very entertaining. I am not sure how they are going to top this next time but I can’t wait to see what they have planned next for this show…oh and BTW my two year old loved it also 😉

Official Premise: When Wendy’s special Storybook is stolen by Captain Hook, Jake and his mates go to London to help Peter Pan’s friend (from the classic movie Peter Pan). The longer the book is out of Wendy’s hands, the more she and her brothers (John and Michael) forget about their past adventures on Never Land. The battle for the book continues in Never Land, where Hook plans to destroy the book and its stories in the legendary Ring of Blue Fire. It’s up to our young heroes to save Wendy’s Storybook and the Story of Peter Pan!

If the hour-long season three finale of “Jake and the Never Land Pirates” is not enough for you there is still much more packed into this DVD. In terms of special features we get ten “Jake’s Never Land Pirate School” shorts. The shorts are “Flying”, “Tick Tock Croc”, “B-B-Big Bugs!”, “Go Bucky!”, “Saving Captain Hook!”, “Mama knows Best!”, “Dancing with the Pirates”, “I’ve Got My Sword!”, “Hop-Hop-Hop!”, and “Look Out!”. These are great watchings for the for kiddies to enjoy. Also includes inside every DVD is an exclusive checker board bandanna with gold coins, which is not available anywhere else but this DVD release. So if you love “Jake and the Never Land Pirates”, this is a must own!