MY HERO ONE’S JUSTICE 2 welcomes brand new heroes to the playable character roster, including Gang Orca, Seiji Shishikura, and Camie Utsushimi! Full Cowling 100% Izuku and Overhaul Ver. 2 make an appearance to show off their powerful moves in the brand new trailer as well!

MY HERO ONE’S JUSTICE 2 also showcases new ways to play with various game modes in “Play Mode”! In Mission Mode, players can scout their favorite characters to their office and complete missions using teams of heroes and villains. In Arcade Mode, players can enjoy unique battles and special conversations with every character. Story Mode also returns in MY HERO ONE’S JUSTICE 2, enabling players to experience the riveting story of the anime from both the Hero and the Villain side!

Wracked with guilt over early childhood wrongs, Shoya Ishida (Orino) is a teenager in search of atonement. The wrong he is looking to right is the bullying of a deaf girl, Shoko Nishimiya (Hayami), that he spearheaded back in elementary school. During those turbulent times, Shoko can only smile and fight back tears as Shoya’s harassment moves from verbal to physical. It piles on as Shoya not only becomes the instigator, but the ringleader for others looking for an excuse to pick on Shoko as well.

Shoko reaches her breaking point, during a particularly unflinchingly cruel moment in the film, and transfers schools. But left in her wake is chaos as the bully becomes the outcast and Shoya’s shunned by friends and classmates. Current day Shoya believes his life, which is devoid of any friends and little meaning, is punishment for his prior torment and vicious taunting. It’s only by happenstance that he realizes his salvation may be in befriending a reluctant Shoya.

Despite clocking in over two hours, “A Silent Voice” is a brisk journey through high school drama and emotional maturity. Within its first few minutes, the film grips viewers with Shoya ominously on the edge of a bridge, narrating his meaninglessness. While the movie may feel like a bullying redemption story, there’s an unmistakable tone of depression. Part of the film’s purpose is to relay how depression, with its tentacle-like grasp on the heart and mind, can impact every facet of one’s life. Most characters, even unnecessary secondary ones, suffer some emotional or mental issue.

The most subtle touches of the film are when we get Shoya’s point of view. He can’t make eye contact, he places an x over people’s faces as if mentally marking them off as potential friends and his depression is clearly compounded by crippling social anxiety. He eavesdrops into nearby conversations, hearing only negative things about himself, but even those poisonous remarks by classmates may be his imagination. There’s even a scene, which on the surface is about miscommunication, which has a deeper meaning implying that Shoya believes unworthy of anyone’s friendship or love.

Shoya’s attitude and demeanor amplifies Shoko’s purity. But we have to wonder how much the stress is getting to Shoko and what kind of impact it’ll have as the film lingers into its third act. It’s not that her personality is simplified, but a lot of it comes from everyone inability to properly communicate with her. The ones who are able to speak with her do open a door into Shoko’s thought process, but just like Shoya, the viewer would only truly know what’s going on if Shoko was able to narrate. This is an intentional frustration on the audience’s’ end that matches the characters on screen.

“A Silent Voice” risks’ being melodramatic on several occasions, but it’s moments between Shoko and Shoya, or when they’re on their own, are when the film works best. During those moments, the duo is treated with teenage realism that isn’t bogged down by oversexualization, drug use, or other clichéd youth problems. Its two teens being treated like adults by the filmmakers. It makes for a better relation to the audience that can reflect on their own troubled youth or their own struggle with depression. 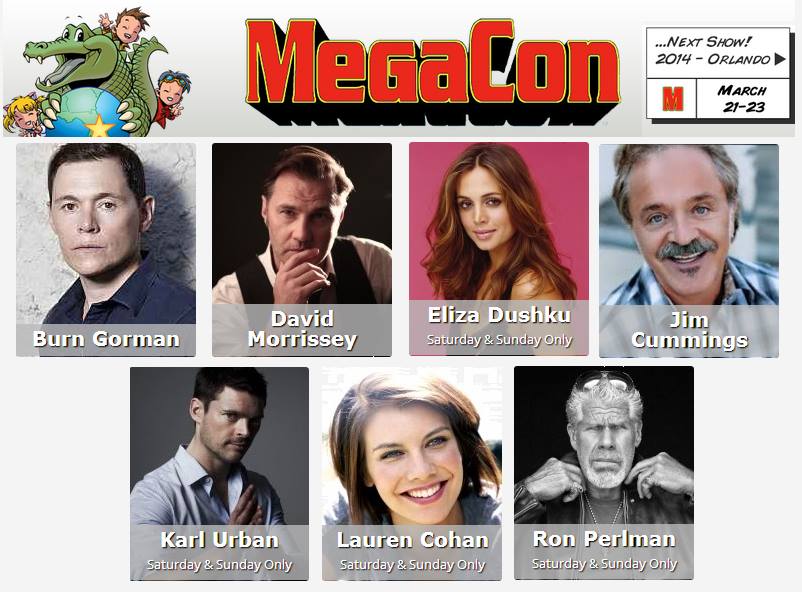 If you live in the Orlando, FL area and are either a comic, anime or film fan you are aware of the annual MegaCon show, which is by far the best fan convention in the area. And this year Media Mikes is offering teaming up with MegaCon to offer two one-day tickets for both Friday and Sunday.

All you have to do is let us know the following: Who is the one person you would like to have the opportunity to meet at a fan convention? (2) random entries will be chosen and the winners will receive (2) 1-day pass ticket for each day. MegaCon runs March 21-23, 2014 at Orlando Convention Center in Orlando, FL. Among the special guests: Stan Lee, Ron Perlman, Karl Urban, Eliza Dushku and some of the cast of “The Walking Dead. It is a great line-up and there will be tons of other great events including panels and more.

This contest runs through Friday, March 7th, 2014. Winners will be notified by email and will have their tickets will be available at Will Call at the convention. For more information head over to www.megaconvention.com

This is yet another Japanese anime adaption of Marvel’s great superheros. Blade is not as popular of a Marvel character but this series kicks some major ass. It comes packed with an entertaining and smart story and is action-packed throughout. They also made Blade to be a hell of a bad-ass and really fights non-stop. Each main character really gets a good back story and it is detailed well why they are fighting these vampires. Overall, this series stands out along with “X-Men” and completely trumps “Iron Man and Wolverine” anime series.  Keep an eye out for a Wolverine-crossover, stopping by to help our half-breed vampire hunter Blade.

The story goes back to the origin of our half-breed Blade. When his pregnant mother was bitten by a vampire, she gave birth to Eric Brooks a baby boy with all the strengths of a vampire and only one of its weaknesses. The vampire hunter know as Blade is struggling to find his mother’s murderer Deacon Frost. His search leads him to Southeast Asia and along the way discovers a vampire plot to take down the world.

Harold Perrineau, known best for TV’s “Oz” and “Lost” really kicks ass with voicing Blade. I prefer the Japanese audio if anything since maybe it makes the anime-style series seem more true. The special features included on this DVD are also pretty decent including three featurettes. “Marvel Anime Universe: Blade Reborn” looking into the creation of the series. “Blade: The Vampire-Slayer” focuses on Marvel’s version of Blade with classic vampire stories. Lastly “Blade Meets Wolverine” is an interview with creator of the series. 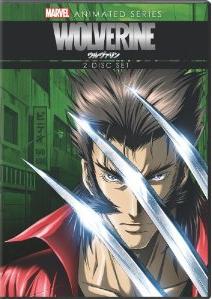 When it comes to Japanese anime version of Marvel characters, how can you go wrong. If you have seen the previously released series for “X-Men” and “Iron Man”, you would know what I mean…or at least with “X-Men”. Like “Iron Man”, I was not a big fan of the “Wolverine” series. When I come to think of it though, I have never been a big fan of the character Wolverine, especially not in any of the X-Men live action movies. If you want to see a great Marvel Anime series be sure to check out “X-Men” and “Blade” series, unless you are a die-hard Wolverine fan.

This aspect of this series that I enjoyed most was the homage to Frank Miller’s Wolverine graphic novel from the 1980’s. When Mariko, the love for Logan aka Wolverine for you newbs, is forced back to Japan by her crime-lord father, Shingen…Logan vows to get her back at any cost. He enters the world of corruption and violence and teams up with young assassin, Yukio in order to battle their way through the Japanese criminal underworld. Keep an eye out for some known faces like Omega Red and Cyclops.

Milo Ventimiglia scowls as his voices the titanium filled character and does a decent job. I prefer the Japanese audio if anything since maybe it makes the anime-style series seem more true. The special features included on this DVD are also pretty decent including three featurettes. “Marvel Anime Universe: Wolverine Reborn” dives into the creation of the series. “The Ferocious Anti-Hero: Wolverine Defined” focuses on our main character. Lastly “Wolverine Meets X-Men” is an interview with creator of the series. 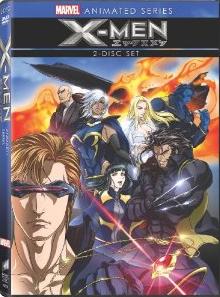 I grew up reading the comics for Marvel’s X-Men and I have always been a fan.  I though have never really enjoyed the live-action “X-Men” films especially the “Origins” series.  This Japanese anime series definitely redeems the “X-Men” brand and kicks some major ass.  It is non-stop action and really intense.  I also very recommend watching with the intended Japanese audio track.  I feel it adds a lot to the anime feel of the series.  Fans of X-Men are going to want to jump at the chance to see this series.  I only wish this series was longer than twelve episodes but luckily there is also a stand-alone “Marvel Anime: Wolverine” series as well.  You here that Sony, please release that one as well!

The series follows the reuniting of The X-Men the death of Jean Grey in order to track down Hisako Ichiki (Armor), a missing teenage girl in Northern Japan. The X-Men need to also go up against fanatical anti-mutant group, the U-Men.  They find out that Professor Xavier reason for bring them back together is bigger than they think. The result could either bridge the gap between mutants and humans, or tear the two species apart forever.

The special features on this DVD are worth checking out though . “Re-Examining The X-Men” is a behind-the-scenes looks into the creating these episodes. “X-Men: A Team of Outsiders” in an in-depth look at Marvel’s famous mutants. “Special Talk Session” is a roundtable discussion with the series creator. though not as cool as this series, check out our review of “Marvel Anime: Iron Man”. 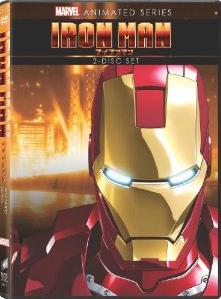 I am a huge fan of Japanese anime. Combine that with the amazing work of Marvel superheros and you should have match made in heaven. Although besides the fact that this series looks really cool as an anime, it just doesn’t entertain as much as I thought it would. The series is rather slow and doesn’t get really start until it is almost over. Overall, this series had some good parts and I would recommend to Iron Man fans. I enjoyed the fact it was produced and default to Japanese audio with subtitles, I think that really adds a lot to the feel of the show. If you are looking for some kick-ass Marvel Anime, I would also highly recommend the X-Men series.

The show follows Tony Stark as his arrives in Japan to build a new arc reactor that will deliver unlimited free energy to the Japanese people. He also plans to retire from suiting Iron Man and focus on plans to mass-produce armor known as “Iron Man Dio”. Stark faces not only challenges from the Japanese government and a mysterious organization Zodiac funded by terrorists. Stark needs to battle of them in order to save the day. Keep an eye out for crossover from Marvel including X-Men’s Wolverine.

The special features on the DVD are impressive and included some decent extras. The first feature called “Re-Imagining Iron Man” focuses on converting the show to anime. “21st Century Hero: The Technology of Iron Man” focuses on Tony Stark’s goodies and gadgets. “Special Cross Talk” is a roundtable discussion with the shows creators. “Voicing Tony Stark” is an interview with Japanese voice of Tony Stark, Keiji Fujiwara. I hope Sony is planning on releasing the rest of the Marvel Anime series for “Blade” and “Wolverine” as well. Fingers crossed.