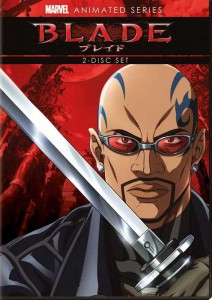 This is yet another Japanese anime adaption of Marvel’s great superheros. Blade is not as popular of a Marvel character but this series kicks some major ass. It comes packed with an entertaining and smart story and is action-packed throughout. They also made Blade to be a hell of a bad-ass and really fights non-stop. Each main character really gets a good back story and it is detailed well why they are fighting these vampires. Overall, this series stands out along with “X-Men” and completely trumps “Iron Man and Wolverine” anime series.  Keep an eye out for a Wolverine-crossover, stopping by to help our half-breed vampire hunter Blade.

The story goes back to the origin of our half-breed Blade. When his pregnant mother was bitten by a vampire, she gave birth to Eric Brooks a baby boy with all the strengths of a vampire and only one of its weaknesses. The vampire hunter know as Blade is struggling to find his mother’s murderer Deacon Frost. His search leads him to Southeast Asia and along the way discovers a vampire plot to take down the world.

Harold Perrineau, known best for TV’s “Oz” and “Lost” really kicks ass with voicing Blade. I prefer the Japanese audio if anything since maybe it makes the anime-style series seem more true. The special features included on this DVD are also pretty decent including three featurettes. “Marvel Anime Universe: Blade Reborn” looking into the creation of the series. “Blade: The Vampire-Slayer” focuses on Marvel’s version of Blade with classic vampire stories. Lastly “Blade Meets Wolverine” is an interview with creator of the series.