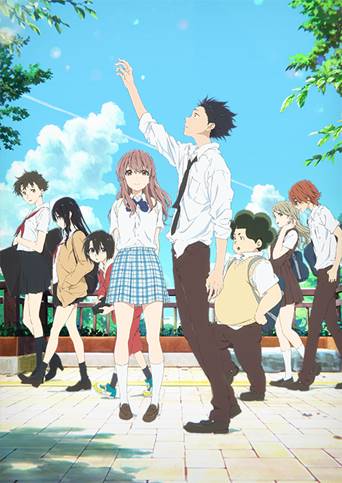 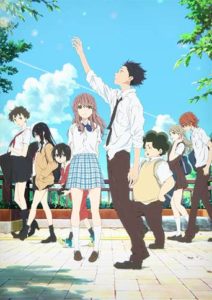 Wracked with guilt over early childhood wrongs, Shoya Ishida (Orino) is a teenager in search of atonement. The wrong he is looking to right is the bullying of a deaf girl, Shoko Nishimiya (Hayami), that he spearheaded back in elementary school. During those turbulent times, Shoko can only smile and fight back tears as Shoya’s harassment moves from verbal to physical. It piles on as Shoya not only becomes the instigator, but the ringleader for others looking for an excuse to pick on Shoko as well.

Shoko reaches her breaking point, during a particularly unflinchingly cruel moment in the film, and transfers schools. But left in her wake is chaos as the bully becomes the outcast and Shoya’s shunned by friends and classmates. Current day Shoya believes his life, which is devoid of any friends and little meaning, is punishment for his prior torment and vicious taunting. It’s only by happenstance that he realizes his salvation may be in befriending a reluctant Shoya.

Despite clocking in over two hours, “A Silent Voice” is a brisk journey through high school drama and emotional maturity. Within its first few minutes, the film grips viewers with Shoya ominously on the edge of a bridge, narrating his meaninglessness. While the movie may feel like a bullying redemption story, there’s an unmistakable tone of depression. Part of the film’s purpose is to relay how depression, with its tentacle-like grasp on the heart and mind, can impact every facet of one’s life. Most characters, even unnecessary secondary ones, suffer some emotional or mental issue.

The most subtle touches of the film are when we get Shoya’s point of view. He can’t make eye contact, he places an x over people’s faces as if mentally marking them off as potential friends and his depression is clearly compounded by crippling social anxiety. He eavesdrops into nearby conversations, hearing only negative things about himself, but even those poisonous remarks by classmates may be his imagination. There’s even a scene, which on the surface is about miscommunication, which has a deeper meaning implying that Shoya believes unworthy of anyone’s friendship or love.

Shoya’s attitude and demeanor amplifies Shoko’s purity. But we have to wonder how much the stress is getting to Shoko and what kind of impact it’ll have as the film lingers into its third act. It’s not that her personality is simplified, but a lot of it comes from everyone inability to properly communicate with her. The ones who are able to speak with her do open a door into Shoko’s thought process, but just like Shoya, the viewer would only truly know what’s going on if Shoko was able to narrate. This is an intentional frustration on the audience’s’ end that matches the characters on screen.

“A Silent Voice” risks’ being melodramatic on several occasions, but it’s moments between Shoko and Shoya, or when they’re on their own, are when the film works best. During those moments, the duo is treated with teenage realism that isn’t bogged down by oversexualization, drug use, or other clichéd youth problems. Its two teens being treated like adults by the filmmakers. It makes for a better relation to the audience that can reflect on their own troubled youth or their own struggle with depression.