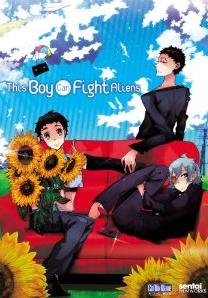 With a title like “This Boy Can Fight Aliens”, sounds strange but completely intrigued. After three back-to-back viewings of this film, I am still not quite sure I completely understand what I watched. I am not stranger to anime at all. Sentai Filmworks is a great contributor to the genre. I also wish the film was incredibly longer. The running time of 30 minutes only seems to be a jumping off point for this film. I also feel like it can see a series as well. For big anime fans, this is definitely something I would recommend.

The story revolves around Kakashi, a boy with no memory of his past.  He lives in a world where aliens come everyday to fight. Kakashi is the one who can take on the aliens. Though with losing his memory also forgot the knowledge of how to actually use his powers. It is up to his friends to help him regain his powers and remember who he is in order to save them from the aliens.

The special features are not the greatest but still worth checking out. There is a few early work shorts from director Soubi Yamamoto. They are three really cool mini-features but I would have liked to see more. There is also a brief interview with Soubi Yamamoto as well. Overall the film is visually super cool and very interesting. Would have loved to review this on Blu-ray since it probably looks mega-cool.