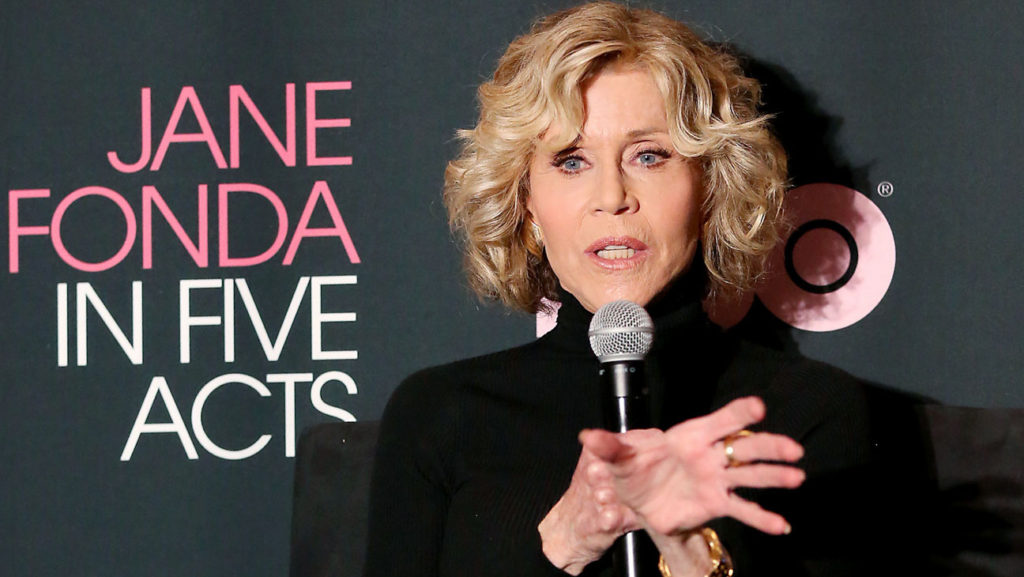 Here is my Jane Fonda story.  In 2005, Ms. Fonda was in Kansas City to promote a book she had written.  I had been able to get my name on the press list in the off chance of getting a few minutes with the Oscar winning actress for a quick interview.  I can’t remember what, but something came up last minute and I was unable to attend.  Imagine my surprise the next morning when my phone began wringing.  It seems that while she was greeting people in line, a former Vietnam War veteran named MICHAEL SMITH spit tobacco juice on her.  Somehow, my name and contact info was discovered on the press list and people assumed it was me.  I received over 1,000 emails, some thanking “me” and others condemning “me.”  I even was invited to address an upcoming Marine Corps reunion in California.  After about two weeks the furor died down, but it was pretty exciting there for a while.

It was almost exactly 47 years ago (September 19, 1971) that President Richard Nixon, on one of his many tape recordings, asked an aide, “What in the world is wrong with Jane Fonda?”

The honest answer?  Not a damn thing!

“Jane Fonda in Five Acts” takes a look back at the actresses life and career, beginning when she was just known as Henry Fonda’s daughter.  Along with James Stewart, no other actor so embodied the image of the normal American male than Henry Fonda.  He was, according to his daughter, “a national monument.”  But behind that image was a man who could not express emotions unless he was in front of a camera.  Ms. Fonda is shown a photo of the family at a picnic, to which she explains that the image is staged.  The smiles forced and phony.  She can tell by the look in her mother’s face that she is not happy (Ms. Fonda’s mother dealt with many mental issues and would eventually kill herself.  She and her brother, Peter, were told she’d had a heart attack.  It wasn’t until years later, when Ms. Fonda read about it in a movie magazine, did she learn the truth).

As a young woman in her early 20s, she makes her way to the home of famed acting teacher Lee Strasberg.  He accepts her into his classes and, after a couple of months, puts her on the stage.  He recognizes her talents and encourages her to pursue them.  She begins to do small parts on television and in film while also modeling.  Tired of always doing the “cheerleader” roles, she heads to France, where she meets director Roger Vadim.  What follows is marriage, a child and a career changing role as the title character in “Barbarella.”

Back in America, she accepts a role in what she calls her first “real” movie, Sydney Pollack’s “They Shoot Horses, Don’t They?<” earning her first of seven Academy Award nominations. (NOTE:  I didn’t see “They Shoot Horses, Don’t They?” until the mid 1980s at a tribute to Sydney Pollack.  If you haven’t seen it, I strongly suggest you do).  Just as she is being taken seriously as an actress she does two things:  cuts her hair and visits Vietnam.

Fonda, shown here with Roy Scheider, won her first Academy Award for her role in the film “Klute.”

Depending on the age of the people you speak with, Fonda is either “a great actress” or “Hanoi Jane.”  There doesn’t seem to be a middle ground.  She was one of the first major celebrities to speak out against the United States’ involvement in Vietnam.  If there is any criticism now it is some of the ways she spoke out.   In the late 1980’s she apologized to the veterans and their families if her actions make things tougher for them.  A chance meeting with former vet and anti-Vietnam activist Ron Kovic gives her the idea for the film “Coming Home,” which would win her her second Oscar.

Now married to activist Tom Hayden, she puts together films that speak to her beliefs.  Many people scoffed at “The China Syndrome,” a film that dealt with a fictional melt-down at a nuclear power plant.  However, two weeks after the film opened there was a real incident at Three Mile Island.  Nobody was scoffing then.  In one of the most emotional moments of the documentary, Ms. Fonda talks about the only film she did with her father, “On Golden Pond.”  She recalls how, during a scene in the film, she surprised her father with a slight touch of his arm, causing the actor to cover his eyes to hide the tears welling up in them.  This would be Henry Fonda’s last film and it earned him his first Academy Award.

As the years progress we learn more about the actress and her life.  Needing to raise money for an organization she and her husband had founded, she produced her own workout video, which today remains the most popular home video ever made.  We follow her through her divorce from Hayden and her marriage to media mogul Ted Turner.  She speaks highly of all three of her ex-husbands.  We also meet some of her children, who explain that growing up was not all limos and mansions.  However, in the end, you end up with an amazing story of an amazing person.  At age 80, Jane Fonda is still going strong.  Here’s to act number six!

“23 Live Sex Acts” is the latest offering from the band Against Me! As the title suggests the album features 23 live tracks which were recorded during various shows from the bands tour last year. The album is being released via Total Treble Music in both digital download and CD formats as well as on special edition colored triple vinyl.

If you have never experienced an Against Me! live show the band’s latest live album will get you as close as possible without actually being there. “23 Live Sex Acts” is easily one of if not the best live album I heard in a very long time. With a set list spanning the groups 13+ year career and capped off by near stellar sound production (I felt the bass could have been more present) I couldn’t have really asked for much more as the tracks blasted through my speakers. Older tracks like “Cliché Guevara” and “Pretty Girls (The Mover) sit perfectly with new tracks like “FUCKMYLIFE666”, “I Was a Teenage Anarchist” and the in your face “Osama Bin Laden and the Crucified Christ”. The album isn’t just a bunch of piped in crowd noise as at one point during the track “New Wave” front woman Laura Jane Grace stops the song to scold security for attempting to throw out a fan. Its brief moments like this that truly put you in the moment making the listening experience very real.

Whether you are a seasoned Against Me! fan who has seen the band countless times or you’re new to the group this album is for you. Over the course of 23 tracks you get an intense live feeling while being presented with a solid representation of the group’s diverse catalog. If you are any type of music fan at all then you would be doing yourself a tremendous disservice not picking up a copy of this album.