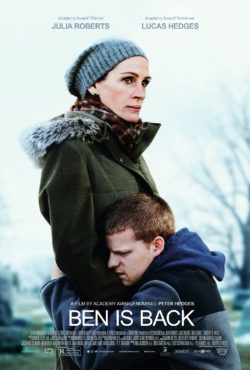 “Ben is Back” starts out well-intentioned enough, but by the end it comes off as a hyper-exploitive freak out. The movie, a day in the life of the Burns’ family, tackles the dire issue of opioids from several different angles. Sometimes it tackles it in very realistic terms, specifically the pain and awkwardness it can create for families in its wake. However, it predominantly tackles it like a daytime soap opera, with the gauche touch of those 80’s drug PSAs.

Ben (Hedges) has unexpectedly returned home on Christmas Eve. His younger siblings, who have no memory of the terrifying nights he put his family through, are happy to see him; His sister and mother not so much. Holly (Roberts), Ben’s mom, immediately goes to work hiding drugs that could trigger her son’s addiction, as well as jewelry and other sellable knick knacks, just in case he’s already relapsed. It’s in these opening moments that the film is emotionally riveting by not holding back on any of its emotional gut punches. Then it starts going off the rails when Holly confronts Ben’s old doctor at the mall and tells him that she hopes he rots in Hell. Merry Christmas from the Burns family!

To dive into the specifics of why “Ben is Back” continues to fall off the wagon, and hard, would be to ruin the film’s second act, which feels more like another movie with the same actors was flipped on in the projector booth. What should have been a harrowing story about addiction, becomes an even more over-the-top “August: Osage County,” involving drugs and crime. There are also several moments where I can just hear Nancy Reagan bemoaning the horrors of addiction and paralyzing viewers with fear that we too can suffer every feasible scenario from just one night of drug use.

It’s not that the things that happen to and around Ben, haven’t happened before or could happen to an addict and their families, but it’s the frequency, severity, and occurrence of which it happens in “Ben is Back” that’s laughable. I half expected Walter White of “Breaking Bad” to pop-up and tell Ben to stay out of his territory. That’s how comically bad it gets. Because of the dire subject matter though, it takes a veteran actor or two to wring out any semblance of seriousness in the script.

No matter how bad the dialogue gets, Roberts and Hedges tow a fine line to keep their characters within the realm of “maybe this could happen.” It’s actually quite impressive seeing Hedges go toe-to-toe with Roberts when they argue or clash. I couldn’t imagine anyone else, in either role, pulling off the same acting acrobatics and making it remotely watchable. In that regard, “Ben is Back” is admirable in its dramatic attempts. Like I said, it’s well intentioned and the first 30 to 40 minutes are good, but sometimes the best of intentions can hurt the cause you’re reportedly fighting for.