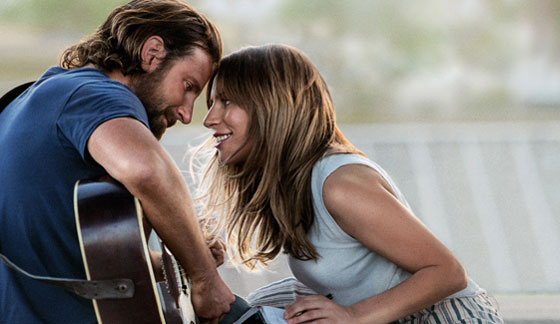 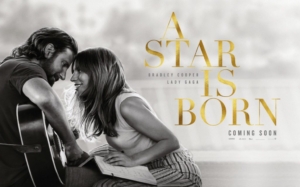 To quote “Beauty and the Beast,” it’s a tale as old as time.  Big star on the way down meets rising star on the way up.  They fall in love.  One embarrasses the other and their love is tested.  The tale is so old that it’s already been told, very well, three times before.  But the fourth time may be the best!

Jackson Maine (Cooper) is a popular singer who has lived his life on the road.  Once enjoying his time on stage, now he gets by with alcohol and drugs, showing up, plugging in then hurrying off-stage to the seclusion of his limo.  One night, while looking for a place to stop, he ends up at a drag club, where he gets the chance to listen to a young woman named Ally (Lady Gaga – I was just going to put “Gaga” but I’m not sure how the first name/last name thing works here.  I guess I could have put “Stefani Joanne Angelina Germanotta” but that would probably confuse you even more.  Ally does an old Edith Piaf song and soon Jackson is mesmerized by her voice.  He invites her out with him, where they buy some beer and talk about music.  When he drops her off at home she figures that’s the last time she will see him.  It isn’t.

A familiar story with enough new twists and turns to keep it fresh, “A Star Is Born” is a triumph.  Much of this praise must go to my rival Bradley Cooper.  (I know my wife loves me, but if Bradley Cooper came knocking I would be just a memory J).  As a first time director, especially in a film starring himself, there is an opportunity to make everything BIG and LOUD and, worse of all, put yourself front and center.  Cooper directs with a restraint that is almost unheard of with newbies.  He frames the story almost as if he’s shooting a documentary, and that close, inside look draws you into the story.  As an actor, Cooper is equally up to the task here.  His voice low and gruff (there’s a great line in the film where Sam Elliott, who plays his brother and who was also a musician, accuses Jackson of “stealing my voice”), he gives quite possibly the best performance of his career, which is saying a lot for a man who has already been nominated for the acting Oscars already in his career.

As Ally, Lady Gaga is outstanding.  We already know she can sing.  I haven’t heard a lot of her songs but I still include the night she showed up at the Academy Awards and sang “The Sound of Music” as one of my favorite all-time Oscar moments.  Not only is she in great voice, she has incredible acting chops.  Both the 1937 and 1954 versions of the film earned Oscar nominations for its stars.  The 1976 version swept the Musical Film Category and I’m predicting that both Lady Gaga and Cooper get nods for their work here.  Great supporting work from Andrew Dice Clay, Sam Elliott and Dave Chappelle make the film even more enjoyable.