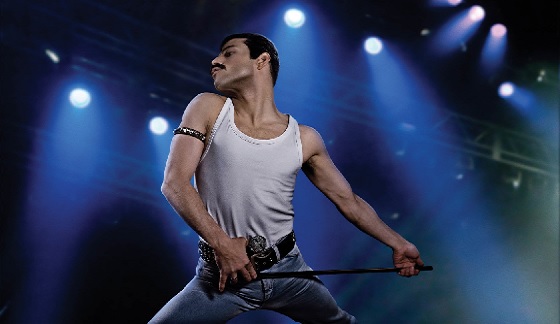 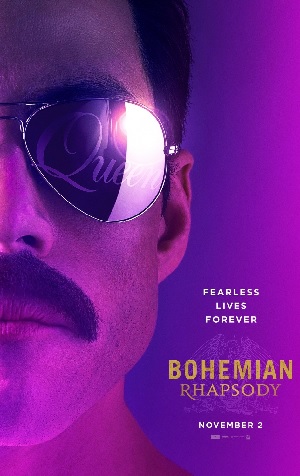 I’m going to confess something here.  On my list of life regrets, one of the ones near the top has to do with the fact that I had a few opportunities in my lifetime to see the band QUEEN live in concert and never went, always telling myself, “I’ll see them the next time they come around.”  Sadly, on November 24, 1991 that statement became moot, as the world mourned the death of the bands flamboyant lead singer, Freddie Mercury (music trivia purists will also note that Eric Carr, the 2nd drummer for KISS, also passed away on that date).  Director Bryan Singer’s new film, “Bohemian Rhapsody,” containing an amazing star-making performance from Rami Malek, lets the world know that Freddie isn’t dead!

London, 1970.  When we meet Farrokh Bulsara (Malek) he is unloading luggage at Heathrow Airport.  He is not happy in his work, especially when his co-workers refer to him as “Paki.”  “I’m not Pakistani,” he constantly reminds them (he was actually Parsi, having been born on the island of Zanzibar before his family moved to England).  While his mother and sister dote on him, he knows his father is ashamed of him, scolding him for going out late at night and imploring him to follow his father’s words of “Good Thought.  Good Words.  Good Deed.”  Farrokh has the opportunity to meet a band who has just lost their lead singer and he soon gets the gig.  A few changes, including the name of the band (and its lead singer) and QUEEN, as well as Freddie Mercury, are on their way.

Full of the music you will fondly remember and featuring one of the most immersive performances by an actor EVER, “Bohemian Rhapsody” is a musical masterpiece.  And while the film is definitely designed around the flamboyant Mercury, the other band members – Brian May (Gwilym Lee), Roger Taylor (Ben Hardee) and John Deacon (Joseph Mazzello) – are given ample screen time, allowing their characters to be as fleshed out as possible.  They enjoy the musical ups (concert tours and success) and downs (the head of the record company hate’s their music and concepts, critics hate the song “Bohemian Rhapsody”) together, as a family.

However, anyone familiar with the QUEEN story knows this may not be a family you or I would like to be a part of.  Besides the “getting better through science” fast track that Freddie s drug abuse puts him on, there is the same kind of in-fighting and arguments between the members of the group.  There is also the subject of Freddie’s sexuality.  He meets the “love of his life,” Mary (Boynton) but she understands that there will always be an unsaid “thing” between them that will keep them apart.

The film follows the band through their appearance at 1985’s LIVE AID.  It is here that they cemented themselves as one of the greatest bands of all time.  Four decades later, they still hold that distinction.

Confession number two:  I’m old enough to say that my first concert was Elvis Presley (Valentine’s Day – 1977) so when I say I’ve seen them all, I’ve seen them all.  And I’ve said for years that the greatest front man EVER was Freddie Mercury.  If you care to disagree, drop me an email and we’ll talk about it.