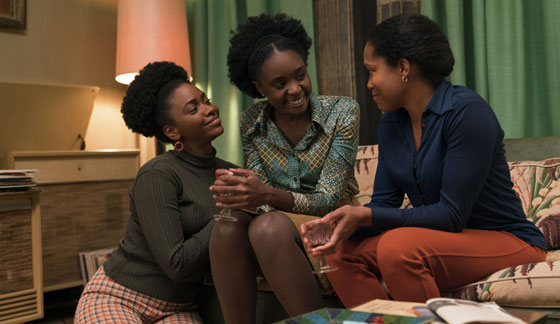 2018 may go down as the year when everything old became new again. Especially in films.  Messages(and misdeeds) from the past were brought to cinemas in new, fresh styles but the messages were not lost.  Films like “Black Panther” and “Blackkksman” made audiences, both black and white, take a look atthe world around them and demand that it change.  2019 continues that path with the latest film from “Moonlight” director Barry Jenkins, “If Beale Street Could Talk.”

Tish (Layne) and Vonny (James) are young and in love.  Vonny isan artist with dreams of opening his own gallery.  Sadly, they live in a time when society, and even members of their own families, are not as supportive as they should be.  They find their love challenged when Vonny is arrested and charged with committing a brutal rape.  We know he’s innocent but, thanks to a racist cop (the creepy Ed Skrein) and a victim (Emily Rios in a very strong performance) who has fled the country, the deck is already stacked against him.

As someone that has always enjoyed reading, I was well aware of the late James Baldwin.  He was an author who was not afraid to write about the world as he saw it, no matter the view.  Director Jenkins, who shared the Best Adapted Screenplay Oscar in 2016 for “Moonlight” – and will surely be nominated again for his work here – has kept the novel’s 1970s setting intact, but the tale told could easily have been placed in today’s world, a place where institutionalized racism is still an ongoing problem.

Jenkins has assembled a skilled cast of actors, both new and old, to shoulder the emotional impact of the story.  In her first feature film, Ms. Layne is the heart and voice of the film (Tish narrates the story as it progresses).  Her bright eyes and constant smile tell the audience that she is in love and will always be, no matter the consequences.  Mr. James, who has portrayed such historically important characters as John Lewis and Jesse Owens, is also strong.  He is a strong black man in an era when some parts of society confused “strong” with “trouble.”  As Tish’s mother, Sharon, Regina King delivers one of the best performances in ANY film released this year.   In their review of “Beale Street,”Entertainment Weekly plainly asked “Will someone please give Regina King an Oscar already?”  I wholeheartedly agree!

A film that makes you think, like the perfect diamond, is rare.  “IfBeale Street Could Talk” is flawless.