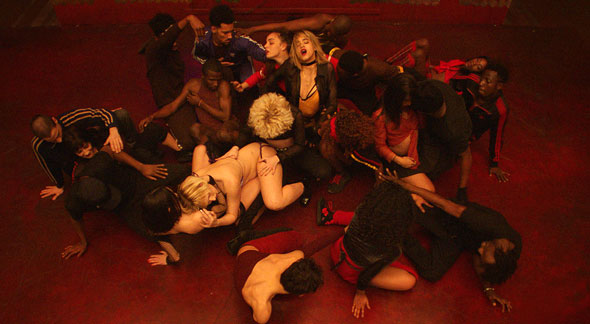 Usually for arthouse films, you hear the phrase, “This may not be for everyone.” When it comes to Gaspar Noe films, they may not be for anyone. Having only seen “Enter the Void,” out of curiosity on Netflix one night, my second trip into Noe’s twisted mind comes in the form of a dance troupe’s celebration before heading out on an international tour. They got the jams, they got the drinks, and they got the food. However, an uninvited guest is about to crash their party.

The jubilation slowly turns into a horrifying mystery as members of the young French dance team suspect someone has spiked their sangria with drugs. Things decline quickly as the LSD takes hold, leading to arguments, more dancing, graphic violence, more dancing, deaths, more dancing, graphic sex and more dancing. Luckily for audience members that might not have the stomach for Noe’s twisted vision, he never comes off as an edgelord looking to exploit his characters for ghoulish fun. Instead he’s more transfixed on how an eclectic group of young 20-somethings in the mid-90’s quickly turn on each other or flock into unsuspecting arms when their perceptions deteriorate.

“Climax” doesn’t abide by any cinematic rules, as it begins with the film’s end credits, then fixates on an old box TV that plays VHS interview tapes of all the dancers we’re about to meet. After every character’s brief introduction, the film switches to the old abandoned school where the madness goes down, beginning with a lengthy dance sequence, all within a single take. There’s actually quite a few single takes in the film, some that would make Alejandro Inarritu scratch his head in curiosity as to how it was pulled off.

A movie like this in anyone else’s hands would be boring, but Noe keeps you transfixed to the screen as he flies seamless and methodically around the school, like a curious specter watching the pure bedlam unfold. There’s genuine dread as several scenarios are left to playout as the LSD amplifies character’s primal instincts. It’s in these moments that you realize that despite our best attempts to do good for the benefit of society, self-preservation will kick in or we’ll resort to our most basic animal instincts. Of course it’s entirely possible that you’ll take away a different experience or viewpoint.

Much of the film is made even more impressive by the tidbit that the cast is made up of professional dancers, not professional actors. We never see the hallucinations from their point of view, but the pain or pleasure is etched all over their faces. The only person of note in this film is Sofia Boutella, and even she gets lost in the group theatrics. In several interviews, Noe has discussed his love of dance. Not as a participant, but more as an observer. “Climax” is almost like his theatrical version of people watching. “Climax” takes that club dancing expressionism that he fondly enjoys and cranks it to 11 by throwing in drugs, blood and sex. It’s a trial by fire where the people become marionettes, with the bass puppeteering their every movement. For those who break free from the trance, they meet an untimely fate or wind up naked with an unlikely lover. It’s a true Heaven/Hell on Earth.

I felt really unsure about “Climax” as I left the theater, but I couldn’t quite narrow down much in terms of technical or storytelling complaints. The cinematography is on another level, matching the constant dance beats in the background. The soundtrack ranges from foreign EDM to more recognizable artists like Daft Punk and the Rolling Stones. I only withhold unflinching adoration for a film like this because I may believe I’m consuming something of substance while blinded by its deliciously fresh style. It’s a brisk, but bewitching film that I’m sure I’ll watch again. It’s in that second watch I’ll either find distaste or amplified admiration for Noe’s vision. Love it or hate, viewers won’t be able to shake “Climax,” much like a bad acid trip.