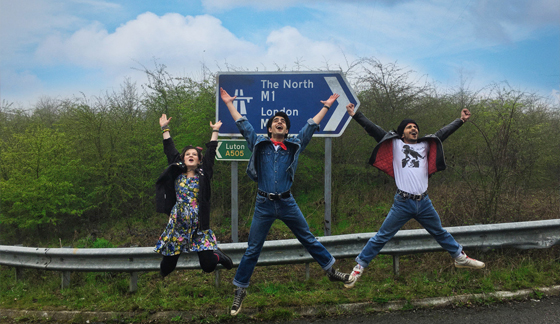 I was introduced to Bruce Springsteen when I was 15-years old.  And I wasn’t introduced to the Boss by a school friend but rather by my father.  He had been out and seen Springsteen’s face on both the covers of TIME and Newsweek magazines so, intrigued, he bought me the “Born to Run” album.  When he handed it to me he said, “This guy is supposed to be pretty good.”  He was.

England in the 1980s.  As the decade begins we meet Javid and Matt – two young boys with different upbringings.  For his birthday, Matt got a new bicycle.  Javid’s parents got him a Rubik’s Cube.  Learning over fun.  They also share another difference.  Javid is Pakistani while Matt is white.  Their friendship is color-blind.  Sadly, their neighbors are not.

We meet up with the two lads in 1987 as they prepare for pre-university schooling.  Javid (Kalra) wants to be a writer, though his father finds that occupation frivolous and wishes him to be a doctor.  Matt (Dean-Charles Chapman) is now a musician with his own band.  One day, after a day of bullying, Javid meets Roops (Aaron Phagura) a Sikh classmate who hands him a couple of cassettes and tells him that he needs “the Boss.”  After a few listenings he readily agrees.

An uplifting film with a serious back story, “Blinded by the Light,” like this year’s “Yesterday,” is an amazing combination of words and music that tells a story that is just as vital today as it was 30 years ago.  Javid is questioned by his father about why he is so enamored by this American and Jewish singer (for the record, Bruce Springsteen is NOT Jewish), unable to believe that this man’s words can have any meaning in his family’s life.  Yet Springsteen has always been a poet for the people, putting their daily struggles and triumphs into words that resonate with his listeners.

Director Chadha, whose best known film is probably “Bend it Like Beckham,” fills her lens with amazing images, often featuring Springsteen’s lyrics superimposed over the scenes, giving the songs and their message added meaning.  She has also assembled an amazing cast.  Kalra and Chapman have a great chemistry, facing the ups and downs of being friends.  Phagura is energetic as Roops, a young man who has discovered the music that comments on his life and is happy to share it.  Hayley Atwell has a nice turn as Javid’s instructor.  And I must give a proper mention to Kulvinder Ghir, who plays Javid’s father, Malik.  Malik is a proud man who is dealt a few setbacks yet never falters in his love for his family.  He only wants his children to succeed…to do better than he did…though he is reluctant to accept the paths they wish to take.

Even if you’ve never enjoyed the music of Bruce Springsteen (I guess there may be a few people out there that feel this way), you will be swept up in the way that music is celebrated here.  In this writer’s opinion, “Blinded by the Light” is pure inspiration!