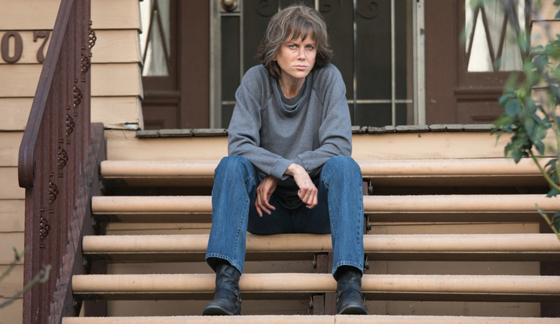 A body is discovered in a deserted area.  Next to it lies the murder weapon and some oddly discolored money.  On the back of the victim’s neck are two very distinctive tattoos.  Detective Erin Bell (Kidman) stumbles to the scene, mutters “I think I know who did it,” and stumbles away.  Thus begins “Destroyer.”

Riding strongly on the narrow shoulders of its lead actress, “Destroyer” is a film that, through a series of flashbacks, tells the story of how Erin Bell went from gung-ho law officer to the self-destructive drunk she is now. We slowly learn that she and her partner (both at work and in love) were deep undercover with a gang of bad guys (think Keanu Reeves’ Johnny Utah in “Point Break,” though I’m not sure how well Kidman can throw a football).  The more we learn the more we aren’t sure whether we should sympathize with Bell’s plight.  She’s still a tough cop – one who will go to any lengths to obtain information – but she’s also a horrible human being.  You feel sorry for her and her plight, but you also can’t help but think she brought it on herself.

Going the “no makeup” route here, Kidman is almost unrecognizable. In fact, in some scenes she more resembles former “Dr. Who” star Tom Baker rather than one of the most beautiful women in Hollywood.  With her hollow cheekbones and mousy hair, she could easily be mistaken for your neighborhood crack addict.  She is the emotional heart of the film and she does not disappoint.

Working from a script by “AEonFlux” screenwriters (Phil Hay and Matt Manfredi), director Kusama, who also helmed the film “Girlfight,” keeps the story moving, giving the viewer just enough information that, no matter how hard they try, they are always a step or two behind.  Well recommended.