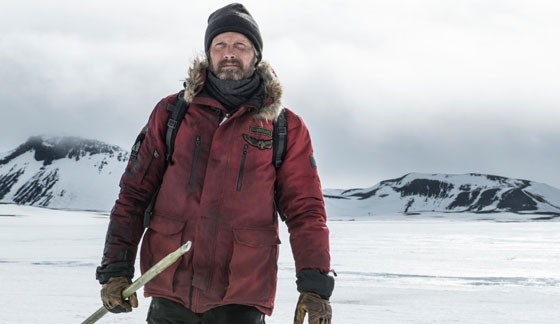 Every once in a blue moon a film comes along that reminds us how truly spectacular cinema can be and replenishes our passion for the artform. The stark Danish adventure/drama “Arctic” happens to be such a film. With a gripping man-versus-nature story that makes “Cast Away” and “All Is Lost” look like cocktail parties, “Arctic” is as impressive as the unyielding icy bleakness which constantly threatens to overwhelm the lone survivor of a plane crash somewhere in the Arctic Circle.

Shot entirely in Iceland, “Arctic” does not waste time with a lot of background exposition to its story, co-written by Brazilian director Joe Penna whose previous directorial work includes the 2015 shorts “Turning Point” and “Beyond.” Instead it thrusts us into an already precarious, ongoing struggle for survival by a man named Overgård (Mads Mikkelsen). He survives each day by sticking to a strict routine that includes maintaining a giant SOS carved into the snow, generating enough electricity with a hand crank to operate a distress signal, and catching fish through ice holes.

We don’t know if he is the pilot of the intact, yet charred plane he uses for shelter, but we do know that whoever was with him died in the crash. Despite all his hardships, Overgård preserves a steely resolve to stay alive and an unyielding belief that help will come. His hard work appears to pay off when his distress signal is picked up by a rescue helicopter. However, Mother Nature denies his victory with a vicious storm that causes his would-be saviors to crash nose first into the unforgiving ice below. Overgård stabilizes the helicopter’s badly injured co-pilot, but the new situation pushes his abilities to keep them alive to the limits. Ultimately, he is faced with a terrible choice of whether to stay put or risk traveling across the Arctic wasteland to find salvation.

Whether it’s playing the nemesis of a Marvel wizard in “Doctor Strange” or being a falsely accused teacher in “The Hunt,” Mikkelsen has repeatedly demonstrated an ability to delve into any role thrown at him. One of the most underrated actors in cinema today, Mikkelsen is a force of nature himself in “Arctic.” He attains a level of intensity that Tom Hanks and Robert Redford were never able to achieve in their respective films as he musters emotions as raw as the fish his character eats. Our hearts beat as his does with jubilation when it appears that he is going to be saved and they sink to the depths when he bottoms out in despair. It’s all done with pure emotional power performed flawlessly by Mikkelsen.

For his first attempt at directing a feature-length motion picture, Penna does his craft proud with a fluid story that offers a few nice twists and plenty of dramatic suspense. Overall, “Arctic” is a must-see that any cinema lover should put on their to-do list even if the film’s setting makes us feel like winter is never going to end.

One Reply to “Film Review: “Arctic””