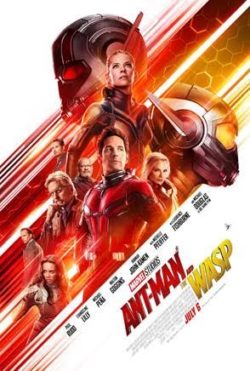 I was a huge fan of the first “Ant-Man” film. I thought Paul Rudd nailed it and brought something different to the Marvel Cinematic Universe. Personally, I don’t think anyone would have expected the first film to have done well to warrant a sequel but here we are. “Ant-Man and the Wasp” is solid follow-up, It’s funnier and even though it lacks a solid villain (big shoes to fill after Thanos in Infinity War), it is a ton of fun! I can also see this film growing on me more, as the wife and I have been quoting it already!

The best part of this film is easily the cast. I love Paul Rudd as Ant-Man he is funny as hell and has some great laugh out loud moments in this film. Michael Peña easily steals the whole show. He is funny as hell! Marvel get this guy a freaking suit for “Ant-Man 3”!!! I am glad to see that David Dastmalchian is back as well. He has a few lines in the film that we’ve been quoting like “Baba-Yaga!” Once you see the movie you will get it. It’s a riot! Randall Park really deserves some props too man. I was howling at some of he’s scenes.

I loved Hannah John-Kamen, who played the villain Ghost as an actress but the character wasn’t great to be the main villain, maybe side kick. Laurence Fishburne is always great to see but he didn’t really have much of a major impact on the film and seemed out of place a bit. Just going to warn you, not a spoiler but Michelle Pfeiffer isn’t in the film much but she does rule when she is in it! Let’s not forgot about Hank Pym! Michael Douglas gets a nice boost in screen time in the sequel and get a few of the scene stealing lines as well.

Official Premise: From the Marvel Cinematic Universe comes “Ant Man and the Wasp,” a new chapter featuring heroes with the astonishing ability to shrink. In the aftermath of “Captain America: Civil War,” Scott Lang grapples with the consequences of his choices as both a Super Hero and a father. As he struggles to rebalance his home life with his responsibilities as Ant-Man, he’s confronted by Hope van Dyne and Dr. Hank Pym with an urgent new mission. Scott must once again put on the suit and learn to fight alongside the Wasp as the team works together to uncover secrets from the past.

The visual effects are solid and I really enjoyed the depth the 3D added to the film (as I also did in the first “Ant-Man”). The shrunken scenes are pretty amazing and the quantum realm was visually amazing! I really like how the film was tied back into “Captain America: Civil War” and I loved how it connected back to “Avengers: Infinity Wars”, no spoilers but stay through the first post credit scene for sure! Your not going to want to miss it! “Ant-Man and the Wasp” might not be the best entry in the Marvel Cinematic Universe but it was fun as hell and I can’t wait to see it again!