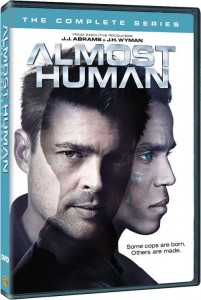 When I saw that J. J. Abrams was Executive producing a new sci-fi/drama for Fox last Fall, I was psyched to check it out. “Almost Human” starred Karl Urban (“The Lord of the Rings” series, “Star Trek” series), Michael Ealy (“2 Fast 2 Furious”, “Barbershop” series), and Minka Kelly (“Parenthood”, “Friday Night Lights”). The cast is great and it had a cool idea but was rather poorly executed. Due to that this short-lived show was canceled after one season consisting of 13 episodes. Not sure if this show really caught on a fan base but thanks to Warner Archive, the show is available in a Complete Series DVD.

Official Premise: In this action-packed show set in 2048, a worse-for-wear cop teams up with a second-hand synthetic android to fight a strain of urban crime that’s evolved in ever more frightening ways. Detective John Kennex survived a catastrophic attack on the city’s police department that cost him nearly everything. Returning over a year later, he finds the transition difficult. Not only does he suffer guilt for the lethal ambush, but department policy now requires that every cop be paired with a highly evolved human-like android partner. Rejecting policy, Kennex reinstates an outdated Dorian android – whose somewhat dysfunctional platform is based on a “Synthetic Soul” program, allowing it to have emotional responses. It’s this flawed humanity, however, that connects Dorian and John. And together, they set out to keep the city safe, uncover the criminal conspiracy that threatens to destroy their world…and find their common humanity.

I think a show like this could have really benefited more from a Blu-ray release. Since even though it was canceled, the series still received an Emmy Award nomination for Outstanding Special and Visual Effects. This MOD (manufacture on demand) release comes with all 13 episodes on 3 discs and is currently available to U.S. buyers via the studio’s WBshop online store. The episodes included in the complete series are Pilot”; “Skin”; “Are You Receiving?”; “The Bends”; “Blood Brothers”; “Arrhythmia”; “Simon Says”; “You Are Here”; “Unbound”; “Perception”; “Disrupt”; “Beholder” and “Straw Man”. There are no special features included besides the episodes.