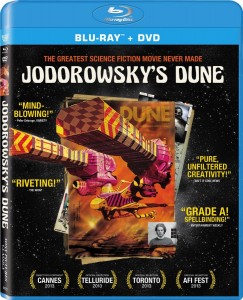 If you are not familiar with Alejandro Jodorowsky by name, he is the mastermind behind classic midnight movies like “El Topo” and “The Holy Mountain”. His films have gained cult status over the years and he is also responsible for a slew of amazing comic books as well. Back in the 70’s, Jodorowsky was attempting to tackle his biggest project yet, a feature film adaptation of Frank Herbert’s futuristic best-seller, ”Dune”. Director Frank Pavich finally uncovers stories and goes behind-the-scenes into the saga of The Greatest Science Fiction Movie Never Made. Included are interviews with H.R. Giger (artist, Alien), Gary Kurtz (producer, Star Wars: Episodes IV and V) and Nicholas Winding Refn (director, Drive) and of course, Jodorowsky himself, who gives such a personal interview. Easily one of the best documentaries that I have seen in the last few years. A must watch!

Official Premise :In 1975, director Alejandro Jodorowsky began work on his most ambitious project yet. Starring his own 12-year-old son alongside Orson Welles, Mick Jagger, David Carradine and Salvador Dalí, featuring music by Pink Floyd and art by some of the most provocative talents of the era, including H.R. Giger and Jean “Moebius” Giraud, Jodorowsky’s adaptation of the classic sci-fi novel DUNE was poised to change cinema forever.

In this documentary, Jodorowsky gave director Frank Pavich access to his production materials on this failed project, including the legendary hard-bound book with was the entire film laid out in story boards. Just being allowed a peak in this film is worth watching alone. Pavich also got a chance to animated a few of these story boards, so we get a chance to see maybe what some of the film would have actually looked like. I would have loved to seen this film come to fruition since it would have been amazing. Jodorowsky is a very interesting and quite deep director and above all man. This film was the winner of the Audience Award and Best Documentary at the 2013 Fantastic Fest and if you are a Sci-Fi fan you need to see this film for sure.

Sony is delivering this film as a combo pack with a Blu-ray and DVD. I would have loved it if they included a Ultraviolet HD digital copy as well. The 1080p transfer is fantastic. I know it might not seem like a big deal because it is a documentary but there is tons of great footage and animation included that looks so good. The DTS-HD Master Audio 5.1 track also works well with composer Kurt Stenzel score, which I absolutely love! In terms of special features, there is only one extra included but it is quite the whopper. There are over 45 minutes of deleted scenes included. One of my only complaint of this film was when it ended, I wanted it to be like an hour longer…and here is the extras footage I was asking for. A must watch again!