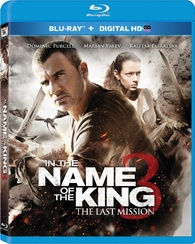 I love Uwe Boll’s films. I always have ever since “House of the Dead”. His films are definitely not for everyone, he has a specific group that he aims to please and definitely does it again with this latest installment in this series. I think that the first “In the Name of the King” was underrated. I thought the second film with Dolph Lundgren was actually better than the first. Dominic Purcell is great in this film and has worked with Uwe on numerous films in the last few years. If you like this series and looking for a fun no-brainer fantasy action flick, then check this out! If we can only convince someone to make him make another “Bloodrayne” movie!

Official Premise: Looper meets Clash of the Titans in the next chapter of the video game-inspired non-stop fantasy action adventure where Hazen Kaine (Dominic Purcell), an American hitman, skeptically enters into what he hopes is his final contract with corrupt European crime lords. When Hazen realizes he’s been tasked with an impossible mission involving the countries royal family, the stakes change and his mission turns into an all-out fight for survival that takes him spiraling back to medieval times. Now completely out of his element, he must evade a vile medieval army and reclaim a stolen kingdom.

Fox delivered this third and last film in the series with a Blu-ray combo pack including a Digital HD Ultraviolet copy as well. Even though the film was low-budget, film does pack some quality as does all Boll’s films. He is a resourceful guy and his films look like they are budgeted much higher than they look. The 1080p transfer is solid and works well with the visual effects. Same goes for the DTS-HD Master Audio 5.1 track, which is great for the action scenes. The only main downfall for me was in the special features, which only includes “The Making of In the Name of the King 3: The Last Mission”, which runs just under 15 minutes.