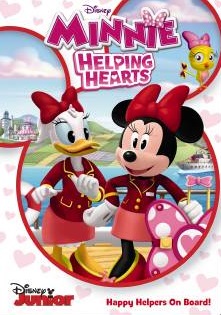 “Disney Minnie: Helping Hearts” is the latest DVD release from the hit Disney Junior series “Mickey and the Roadster Racers”. Disney isn’t dumb at all their new show may be themed towards boys at first but every episode of “Mickey and the Roadster Racers” also includes a second part which focuses specifically on “Happy Helpers” featuring Minnie, Daisy, and Cuckoo-Loca, so the girl market is covered also! Honestly the second half of the episodes are personally my (and my daughters) favorite anyway so this DVD is a win!

These episodes are fun and primarily focused on Minnie, Daisy, and Cuckoo-Loca but still feature Mickey and the whole gang a bit as well. This latest DVD is missing the usual bonus item that comes with a Disney Junior DVD like a necklace or cardboard cut out as a bonus but still comes timed perfectly for Valentine’s Day and is quite cheap, running under $10 bucks, which make this a great gift for your special someone! I am looking forward to future releases from “Mickey and the Roadster Racers” as this is a fun show that also teaches great lessons to the kids watching!