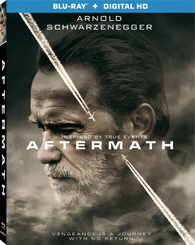 I know everyone has been shitty on Schwarzenegger’s films recently but he is really stepping out of his comfort zone with his last two films “Maggie” and now “Aftermath”. They are little indie films that surprisingly deliver solid performances from the Terminator. His glory days may well be gone with starring in huge blockbusters but solid films like this should get him more credit than they have. I say Kudos to him and I hope he does more films like this. Also my boy, Scoot McNairy, deserves a big chance finally. He nails this role (and every other he does as well). He is an amazing actor and deserves a big shot.

Official Premise: Roman’s (Schwarzenegger) life changes forever when he loses his wife and daughter in a plane crash. He attempts to move on from the tragedy but soon finds that he cannot face life without confronting Jake (Scoot McNairy), the air traffic controller responsible for the accident.

Lionsgate delivered “Aftermath” in a combo pack with a Blu-ray disc and a digital copy as well. The 1080p transfer works for the scope of the film, nothing flashy or big here but I like the way it was shot. The DTS-HD Master Audio 5.1 track also does a good job of building up the suspense throughout. The special features are light and nothing major here. There is an audio commentary with Director Elliott Lester and Producer Eric Watson as well as interviews with Director Elliott Lester and Director of Photography Pieter Vermeer included further discussing the film.