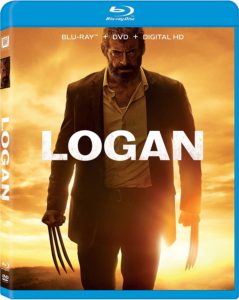 Personally, I have never really gotten excited for the films in the “X-Men” universe. “Logan” is the first film in the franchise that has getting my attention. It is dark, gritty, violent and intense. It is honestly how a Wolverine film should be. It is also set in an alternate X-Men universe, so it almost makes you think that mutants aren’t real in this world and is it very interesting. Easily one of my favorite films of the year and no question the best “X-Men” movie…with Wolverine (sorry “Deadpool” wins that)

Official Premise: In the near future, a weary Logan (Hugh Jackman) cares for an ailing Professor X (Patrick Stewart) at a remote outpost on the Mexican border. His plan to hide from the outside world gets upended when he meets a young mutant (Dafne Keen) who is very much like him. Logan must now protect the girl and battle the dark forces that want to capture her.

Fox is delivering this Blu-ray as a three disc set with two Blu-ray discs, a DVD and a digital HD copy. There are two versions of the film: the theatrical cut and also the new black and white cut called “Logan Noir”. The film does work very well in the black and white setting gives the film more life and another way to enjoy it.

The 1080p transfer is flawless. It was shot beautifully and doesn’t feel like any of the other films in the “X-Men” franchise. Same goes for the black and white cut which gives this film a true noir feeling. The DTS-HD Master Audio 7.1 is also perfect. The action is literally wall shaking and the score is amazing.

The special features are good but not amazing, the higher score comes due to the fact that there is the alternate cut of the film, “Logan Noir” on its own with accompanied with an audio commentary track with director James Mangold. On the main disc, there is the same commentary track, which is excellent BTW and a few short deleted scenes. The main winner is a solid 75+ minute behind-the-scenes look into the film “Making Logan”, worth checking out for sure!