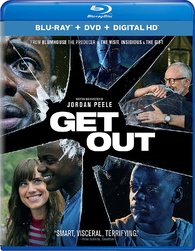 “Get Out” is a once in a decade hit. It cost nothing, came from a first time director, had no well-known cast and yet destroyed the box office and all other films in its path. Hollywood is going to spend the next decade trying to replicate this one. I personally have loved Jordan Peele in his sketch comedy show “Key & Peele” but this film is SO MUCH different. It is a social satire mixed with a horror film. Totally original and different. “Get Out” is an excellent film that will leave you holding her breath in terror and at the same time laughing out loud. This is no question one of the best films of 2017.

Official Premise: Now that Chris (Daniel Kaluuya, Sicario), a young African-American man, and his girlfriend, Rose (Allison Williams, “Girls”), a young white woman, have been dating for several months, she invites him for a weekend getaway upstate at her family’s upstate home with parents Missy (Catherine Keener, Captain Phillips) and Dean (Bradley Whitford, The Cabin in the Woods). At first, Chris reads the family’s overly accommodating behavior as nervous attempts to deal with their daughter’s interracial relationship, but as the weekend progresses, a series of increasingly disturbing discoveries lead him to a truth that he could have never imagined.

I knew of the film’s lead, Daniel Kaluuya, from his role in the BBC series “Black Mirror”, which he stood at boldly. He was amazing in this film and I see really big things coming to him in the near future. Also VIPs in this film were veterans Catherine Keener (Being John Malkovich) and Bradley Whitford (“Billy Madison”). When you are watching this film you will find it hard to take your eyes off the screen. I cannot wait to see what Jordan Peele has planned next (I hear it is another social satire and couldn’t be more psyched). This is a movie not to be missed for sure.

Universal delivered the film as a combo pack with a Blu-ray + DVD + Digital Copy included. The 1080p transfer works perfectly for the film. It is super sharp and the film which has a specific look to it ends up looking sharper than it should. The DTS-HD Master Audio 5.1 track is simply haunting. From the score to the stirring of the damn spoon, this track lures you into deeper into the sucken place with our actors.

The special features are a little lighter than hoped but still some decent content included here. First we have an Alternate Ending with optional Jordan Peele commentary. Solid but I am still happier with the theatrical ending. There is a crazy total of nearly 25 minutes of Deleted Scenes included also with optional Peele commentary. “Unveiling the Horror of Get Out” is a quick behind-the-scenes look into the film. Lastly there is a short Q&A Discussion with Writer/Director Jordan Peele and the Cast, as well as an audio Commentary with Writer/Director Jordan Peele, which is a must listen for sure.