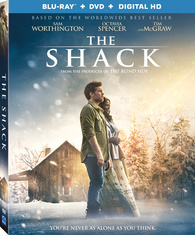 “The Shack” is the latest faith filled drama to be released, hoping to catch that niche market. I am not one to have huge religious beliefs but this film definitely caught my attention. A little “Hallmark movie” cheesy at times yet it still delivers a good solid message about faith and could help some people who are looking for answers within their beliefs.  Rounded out with a solid cast including Sam Worthington (where did this guy disappear to?), Octavia Spencer (always lovely and such an amazing actress) and who doesn’t need a little country loving from Tim McGraw, the musician adds a nice addition to the cast as well. Worth a watch if you are open minded.

Official Premise: Based on The New York Times best-selling novel, written for the screen by John Fusco (The Forbidden Kingdom) and Andrew Lanham (The Glass Castle) & Destin Cretton (The Glass Castle), and directed by Stuart Hazeldine (Exam), The Shack takes us on a father’s transformative spiritual journey. After a family tragedy, Mack (Worthington) spirals into a crisis of faith and questions God’s existence and life’s purpose. Mack is unable to move on, until he gets a mysterious invitation to an abandoned shack. There, God reveals Himself in the form of three strangers led by Papa (Spencer). Mack’s journey will transform audiences of all ages, in this movie that you will want to watch over and over.

Lionsgate delivered this film as a combo pack with a Blu-ray + DVD and a Digital HD copy included. Appreciate the combo back here because since reviewing it, it is making its rounds with the family taking turns for those that have been wanting to see it. It is nice to have the various formats to share with everyone. The 1080p transfer was solid. The scenery is beautiful and the colors are vibrant. The DTS-HD Master Audio 5.1 audio track is also solid, quiet yet very effective with simple sounds standing out.

The special features are decent, nothing amazing but a few good featurettes. To start, there is a solid audio commentary track with Director Stuart Hazeldine and then we have five featurettes included. The first is “Touched by God: A Writer’s Journey” which focuses on author William Paul Young. There is a song featurette for “Heaven Knows” – The Power of Song with Hillsong United, as well as a basic EPK behind-the-scenes in “Something Bigger Than Ourselves: The Making of The Shack”. “God’s Heart for Humanity”piece about faith and interpretations of it. Lastly “Premiere Night: A Blessed Evening” features radio personality Delilah and rounding out with one deleted scene included.