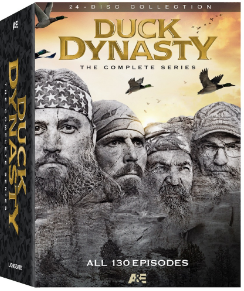 It’s hard to believe that “Duck Dynasty”, the reality television series developed by A&E, first aired in March 2012 has come to an end. The show had a mega successful run of 130 episodes over 11 seasons with a few spin-offs. The show portrays the lives of the Robertson family, who became successful from their family-operated business, Duck Commander. The show may have not been for everyone and personally I hate reality TV, but this show spoke to me. It has a strong family value deep within it ending every episode with a family meal and prayers. I may have not always agreed with the personal views of the family outside of the show but overall it is a fun family show that will be missed.

Official Premise: Grow a beard and grab the camo! Here’s the ultimate collectible for Duck Dynasty® fans! For 11 seasons, millions of TV viewers tuned in for the colorful adventures and homegrown humor of the Robertsons, the backwoods family that built an empire out of a small duck call business. Now you can enjoy all 130 episodes, including some of your favorite unforgettable moments — Willie and Si’s woodchipper competition, Sadie’s driving lessons, a redneck Christmas, and John Luke’s wedding — in one spec-quack-ular collection!

If you are a fan of this show then this is the ultimate release to own but if you are late to the show and just finding out about this series, this again makes a perfect way to dive and binge this series. There are the 130 episodes spanned out over the 24 discs which are formatted with 16×9 Widescreen 1.78:1 Presentation and packing a Dolby Digital Audio 2.0 tracks. So if when you are done with the FIFTY hours of episodes, there are also an additional FIVE hours of bonus features included, which only makes this release even more sweeter. The trick in getting this gift set is that it is only available on DVD at Walmart for the suggested retail price of $99.98. Don’t miss this!