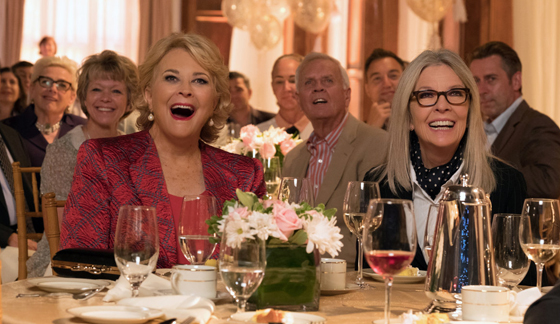 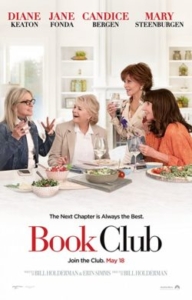 Between them they have 13 Academy Award nominations and 4 Oscars.  THEY are Jane Fonda, Diane Keaton, Candice Bergen and Mary Steenburgen and together they form the members of Paramount’s latest comedy, “The Book Club.”

Keaton plays Diane, recently widowed.  Fonda is Vivian, a wealthy hotel owner who refuses to sleep with men, meaning she’ll have sex but she won’t stay the night.  Bergen is Sharon, a Federal Judge whose husband (Ed Begley, Jr) left her 18 years ago and continues to date much younger women.  Steenburgen is Carol, married to the recently retired Bruce (Craig T. Nelson) who seems to have lost all interest in everything but his old motorcycle.  Each month this quartet of ladies meets and discusses a book they have recently read, an appointment they started in the 70s with Erica Jong’s “Fear of Flying.”  Feeling like the last few months entries have been lifeless, Vivian decides to spice up things by introducing the “50 Shades of Grey” series to their reading tables.  And spice things up it does.

There is nothing more enjoyable than seeing professionals at the top of their craft and “The Book Club” does not disappoint.

The film takes an honest, but humorous, look at love after 60.  It’s not all roses and champagne.  As the book begins to stir their desires, the three single women meet similar aged men who have refused to let age slow them down.  Diane meets a handsome airline pilot (Andy Garcia).  Vivian rekindles an old romance with Arthur (Don Johnson) while Sharon explores the world of on-line dating with both Richard Dreyfuss and Wallace Shawn.  The story has its great share of laughs but also some emotional times of reflection, all driven by a true all-star cast.

FYI, the four leading ladies also have between them 38 Golden Globe nominations (14 wins) and 12 Emmy nods (5 wins).  They should have called this film the Golden Girls.