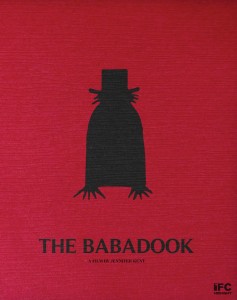 Those are words that I cannot get out of my head since watching this Australian psychological horror/thriller. I absolutely loved this film. I watch a lot of horror films looking for that big scan but unfortunately it is very rare that a film can scare me, I mean really scare me, the last was James Wann’s “Insidious” back in 2010. I can add “The Babadook” to that list now. This film is near perfect and much deeper than you would expect from a typical horror flick. It has some deep symbolism and really takes you on a dark journey through the dealings of grief and loss. If you are looking for something truly original that will leave you discussing for days/weeks, I would highly recommend checking this out.

Official Premise: Six years after the death of her husband, Amelia struggles to discipline her “out-of-control” six-year-old Samuel – a son she finds difficult to love. Samuel’s dreams are plagued by a monster he believes is coming to kill them both. When a disturbing storybook called “The Babadook” turns up at their house, Samuel is convinced that the Babadook is the creature he’s been dreaming about. And when Amelia begins to see glimpses of the creature herself, it slowly dawns on her that the thing Samuel has been warning her about may well be real.

Scream Factory is behind this Blu-ray release of “The Babadook”. They are releasing it with a limited edition slipcase (shown above) with a really cool pop out cover. This is a must have for any fan of the film. The Blu-ray presentation is near perfect also. The 1080p transfer gorgeous and so well shot within its in 2.35:1 aspect ratio. The film is quite 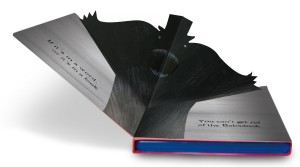 dark and its use of black and shadows are perfectly showcased here. Same goes with the soundtrack. The score to “The Babadook” is easily one of the best horror scores in years and it sounds outstanding on this DTS-HD Master Audio 5.1  track.

The special features are also a must watch if you enjoyed the film for sure. There is Director Jennifer Kent’s Short Film, “Monster” included. “Creating the Book with Illustrator Alex Juhasz” is one extra that I wish was muchlonger. It look into how the book was made. “A Tour of the House Set” is a cool walk through on the set. “The Stunts: Jumping the Stairs” focuses on the film’s wire work. “Special Effects: The Stabbing Scene” discusses briefly how this scene was shot. There is anothe short Behind the Scenes look into the production. The big one is “Cast and Crew Interviews”, which runs just over an hour and features chats with actors Essie Davis, Daniel Henshall, Barbara West, Hayley McElhinney, director Jennifer Kent, costume designer Heather Wallace, producer Kristina Ceyton, and producer Kristian Moliere. Lastly, there are a few short deleted scenes.  and two theatrical trailers