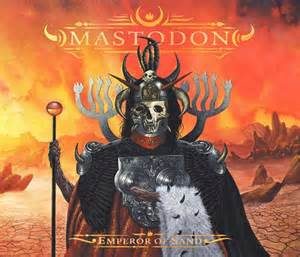 Atlanta, GA rockers Mastodon return with their 7th studio album titled “Emperor of Sand”. The 11 track album is a dark and foreboding piece that revolves around the story of a desert wanderer who has been handed a death sentence. Produce by Brendan O’Brien (AC/DC, Rage Against the Machine) and released via Reprise Records “Emperor of Sand” serves as the follow up to the bands 2013 release “Once More ‘Round the Sun”.

Ever since seeing Mastodon play the second stage of Ozzfest in 2005 the band has always been able to catch my attention. “Emperor of Sand” did that and them some as the album runs the gamut of styles and sounds over the course of its eleven tracks. Tracks like the rawkus “Sultan’s Curse” and the catchy “Show Yourself” featured more straight forward arrangements while songs such as “Clandestiny”, “Scorpion Breath” and “Jaguar God” allow the band to stretch their legs some while showcasing a unique range and diversity through a variety of tones, texture and subject matter.

“Emperor of Sand” is an entertaining album which offers something a little different each time you listen to it. One thing that always seems to surprise me about Mastodon is that despite being only a four piece band they have a very immense sound capable of filling every nook and cranny of your senses. Combined with the members impressive musicality and the groups continued use of unique subject matter “Emperor of Sand” is a must have.